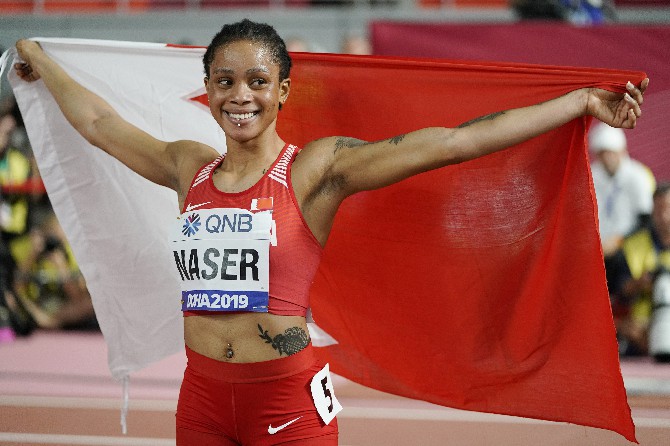 World champion sprinter Salwa Eid Naser will have a two-day appeal hearing next month that could lead to a ban from the Tokyo Olympics for breaking anti-doping rules.
The Court of Arbitration for Sport said yesterday it will hear the case involving the 400-meter runner over two days on April 22-23.
The World Anti-Doping Agency and World Athletics both filed appeals at CAS to challenge an independent tribunal ruling last year that cleared Naser on a technicality for doping tests she missed.
A verdict could be announced urgently with the Diamond League track series set to start in May. The first women’s 400 race is on May 23 in Rabat, Morocco.
The women’s 400 event at the Tokyo Olympics is scheduled from Aug. 3-6.
Naser ran the fastest women’s 400 since 1985 to win the world title 18 months ago in Doha, Qatar, while she was under investigation.
The 22-year-old Bahraini was allowed to keep the title despite being charged by the Athletics Integrity Unit with “whereabouts” failures — missed tests and incorrect updates on a database detailing where athletes can be found each day by sample collection officials.
Athletes can be banned for two years if they have three failures within one year.
Naser denied wrongdoing last year when the investigation was revealed and said missed tests could happen to any athlete.
Naser was found by a tribunal in London to have three whereabouts failures from March 2019-January 2020, but they technically counted as spanning more than one year according to anti-doping rules.
The ruling also swung on a fourth possible violation for a sample that could not be taken in April 2019 when officials went to her apartment building in Riffa, Bahrain. AP