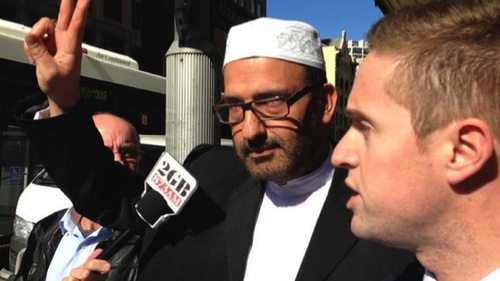 Australian authorities are probing why the gunman responsible for a deadly Sydney hostage-taking was free on bail and not on a watchlist, despite his history of violence and extremist sympathies.
Man Haron Monis, 50, died along with two of his captives in the Lindt Chocolat Cafe in the early hours of Tuesday, after a 16-hour siege. The self-proclaimed cleric from Iran was awaiting trial on a string of charges including being an accessory to the murder of his ex-wife, and had warned that Australia faced an attack for sending troops to Afghanistan.
“We particularly need to know how someone with such a long record of violence, such a long record of mental instability, was out on bail after his involvement in a particularly horrific crime,” Prime Minister Tony Abbott told reporters in Canberra yesterday when announcing an urgent probe into the siege with a report due by the end of January.
The government’s review will examine and make recommendations about “Monis’ arrival in Australia and subsequent granting of asylum and citizenship, what information agencies had about him and how it was shared; and whether relevant national security legislative powers could have been better used,” Abbott said in a statement. The head of the prime minister’s own department and the most senior civil servant in New South Wales state will jointly prepare the report, he said.
The state’s premier, Mike Baird, echoed Abbott’s concerns and said Sydneysiders had “every right to feel upset” that Monis had been at large.
Monis arrived in Australia in 1996 claiming to be a refugee. Iran’s Fars news agency said Australia denied an attempt to extradite him back to the Islamic Republic, where he’d been indicted for fraud and went by the name of Mohammad Hassan Manteghi Bourjerdi.
“We’re all outraged that this guy was on the street,” Baird said Tuesday. “We need to understand why he was, we also need to understand why he wasn’t picked up, and we’ll be working closely with the federal authorities together with our own agencies to ensure what we can do better.”
State Police Commissioner Andrew Scipione told reporters yesterday his force had applied to have Monis refused bail and that the decision had been taken by the courts.
Authorities are also investigating how Monis acquired the sawnoff shotgun apparently used in the attack, Abbott said.
Monis held 17 hostages in the cafe on Martin Place, a plaza at the heart of Sydney’s financial and legal district, and forced some to hold a black Islamic flag known as a Shahada against the window.
Mother-of-three Katrina Dawson, a 38-year-old barrister, and cafe manager Tori Johnson, 34, were killed. Jason Scott and Kambiz Foroohar , Bloomberg