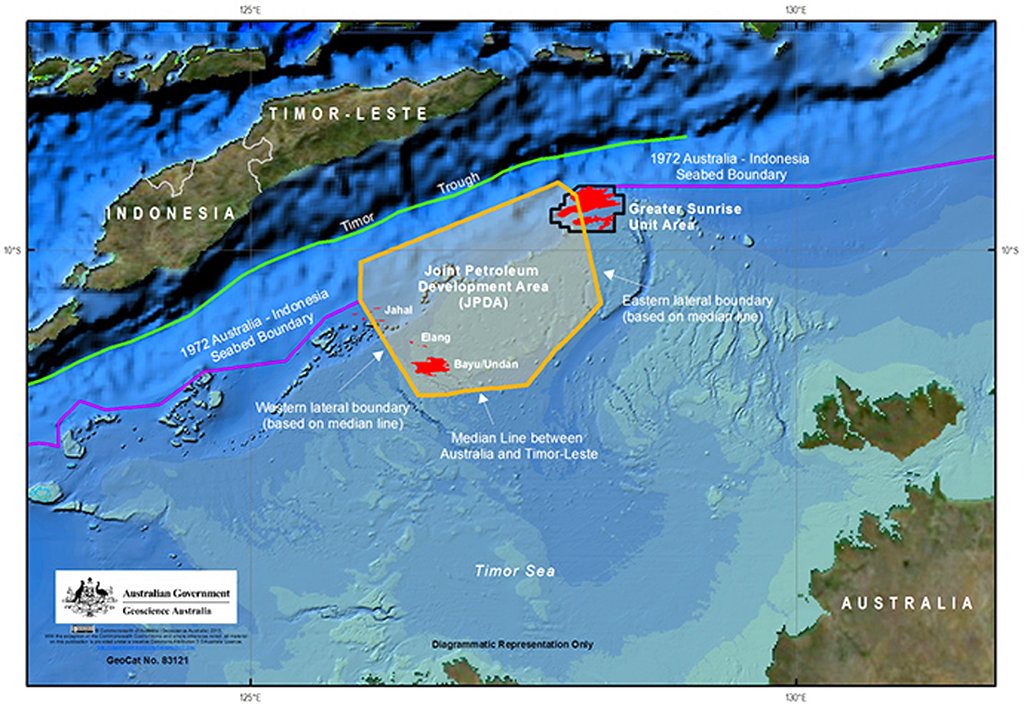 Australia and East Timor will sign a treaty that draws the first-ever maritime border between the neighbors, resolving years of bitter wrangling with a deal that carves up billions of dollars of oil and gas riches that lie beneath the Timor Sea.

Australia and its impoverished half-island neighbor are to sign the agreement at the United Nations today (Tuesday), putting to rest a dispute that has dominated and soured relations since 2002, when East Timor emerged as a fledgling nation independent of Indonesia.

The terms of the deal negotiated in The Hague through the Permanent Court of Arbitration have not been made public. But achieving East Timor’s ambition of a border midway between the two countries would encourage Indonesia to renegotiate its own much longer maritime boundary with Australia agreed in 1971 under outdated international law. The Indonesian border with Australia extends east and west of the new East Timor-Australia boundary and the vast expanse Indonesia allowed Australia is a source of increasing irritation in the capital Jakarta.

The revenue split from the new agreement is crucial for East Timor, with a population of 1.3 million people who are among the poorest in the world. Unemployment is high and young people are increasingly looking abroad for work.

East Timor’s oil revenues, which finance more than 90 percent of government spending, are rapidly dwindling due to the exhaustion of existing fields in its territory. The country’s $16 billion sovereign wealth fund could be empty within 10 years because the government’s annual withdrawals are exceeding its investment returns, according to La’o Hamutuk, an East Timorese research institute.

“We thank God because our sea becomes more widespread … our economic zone becomes bigger,” Belo said. “In the sea and on the sea bed, there is much wealth. Timorese will diligently explore and make this wealth contribute to us.”

But by 1989, after a decade of talks, Australia and Indonesia agreed to disagree on where the line should be drawn for the sake of allowing oil and gas drilling in the resource-rich Timor Sea to proceed. The rival border options became the north and south edges of a box called the Joint Petroleum Development Area. Australia and Indonesia shared the royalties piped from that disputed seabed.

Australia pressured East Timor into accepting the same border compromise in a 2002 treaty to provide legal certainty for developers of the massive Greater Sunrise oil and gas field, an untapped resource in the Timor Sea worth tens of billions of dollars.

Australia was widely criticized in 2016 over its unsuccessful rejection of the Permanent Court of Arbitration’s jurisdiction to hear East Timor’s border complaint. Many saw Australia as undermining its lecturing of China to abide by international law on Chinese territorial claims in the South China Sea.