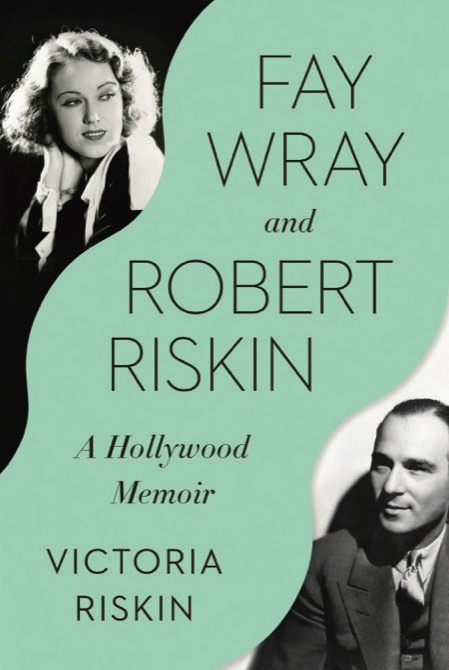 If there was an Academy Award for movie books, Victoria Riskin would be making room beside the Oscar her father won for writing the romantic comedy classic “It Happened One Night.” Part biography, part Hollywood history, part love story, Riskin’s memoir about her parents is captivating and poignant.

Her mother, actress Fay Wray, became an ageless icon as the beauty held by the beast atop the Empire State Building in 1933’s “King Kong.” Her father, Robert Riskin, wrote his way to acclaim with scripts for “Mr. Deeds Goes to Town” and other Depression-era films. Their lives roll out in Victoria Riskin’s pages like the plots of the feel-good movies they made back then — people with little but talent and determination overcome adversity and achieve their dreams. And one of their dreams was to find the right someone to love.

Riskin (1897-1955) was born in New York to Jewish immigrants from Russia; his only connection to his father’s work as a tailor was a love for stylish suits. He quit school at 13, taught himself how to type and pursued an interest in show business. At 17, the handsome, quick-witted kid from Brooklyn who liked to tell stories began producing comedy shorts. The naturally energetic Riskin later wrote and produced plays for Broadway and eventually ended up in Hollywood, his work with director Frank Capra one of the screen’s most productive.

Wray (1907-2004), born in Alberta, Canada, got to Hollywood first and by wholly different means. Her Mormon parents moved the family to Arizona and later to Salt Lake City, their children then numbering six and seldom well-fed. Her daughter describes the Wray family’s years in the nearby mining town of Lark, Utah, as marked by “grim and grinding poverty.” Wray’s father left town for work and never came back.

Fay’s mother moved her brood back to Salt Lake City. Two years later, she allowed another daughter’s young boyfriend, a photographer, to take Fay with him to Los Angeles to find work in the movies for the pretty, dark-haired teenager. Luck was with her. Minor roles in comedy shorts led to a contract with Hal Roach Studios at 15 and later Universal Studios. She was on her way — as an actress and the family breadwinner.