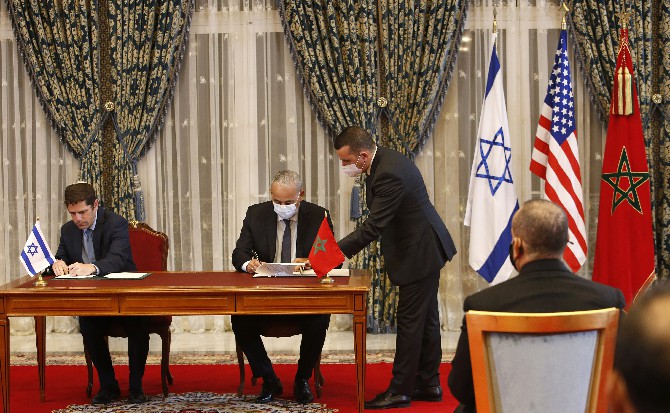 Two Israeli airlines launched their first commercial flights between Israel and Morocco on Sunday, less than a year after the countries officially normalized relations.
Israir’s flight departed Tel Aviv for Marrakech with around 100 Israeli tourists, the company said, hours before Israeli national carrier El Al dispatched its first direct flight to the same destination.
Israeli Tourism Minister Yoel Razvozov said the new direct flights would “help advance fruitful tourism, trade and economic cooperation and diplomatic agreements between the two countries.”
Israel and Morocco agreed to normalize relations in late 2020 as part of the U.S.-brokered “Abraham Accords.” Morocco was among four Arab nations, including the United Arab Emirates, Bahrain and Sudan, to establish diplomatic relations with Israel.
As part of the deal, the United States agreed to recognize Morocco’s claim to the long-disputed Western Sahara region, however the Biden administration said it will review this decision. Morocco’s 1975 annexation of Western Sahara is not recognized by the United Nations.
Many Israeli Jews have lineage that traces back to Morocco, which is still home to a small Jewish community of several thousand.
El Al said in a statement before the departure of its first flight that the company plans to operate five flights per week between Israel and Morocco.
“We hope that now many can know Morocco better, to experience and be excited by this special country that is deeply rooted in Israeli heritage, culture and experience,” said El Al CEO Avigal Sorek.
After the first flight arrived in Marrakech, the director of the Moroccan national tourism office, Adil Fakir, called it “a crowning moment of the important decision taken by Morocco to resume relations between the two countries.”
The head of the Israeli liaison office in Rabat, David Govrin, said it would “strengthen the existing ties between our two people.” The head of the Jewish community in the Marrakech-Safi region, Jacky Kadoch, also welcomed the development. MDT/AP