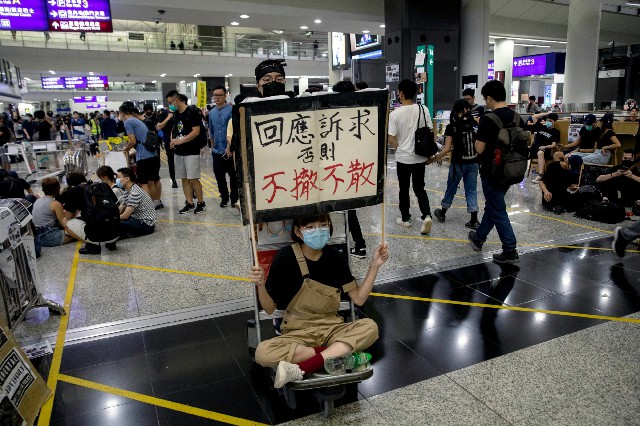 Hong Kong Airlines Ltd. is delaying salaries as protests have “severely affected” the city’s third-biggest carrier, whose finances were already under strain before anti-government demonstrations flared in June.
Only cabin crew and overseas employees will receive their November wages on time, while all other Hong Kong-based workers will be paid on Dec. 6, the closely-held airline said in an email Friday. It said revenue dipped significantly in November — a low travel season — and impacted the monthly payroll.
Authorities have been concerned about Hong Kong Airlines for months, regularly requesting updates on its financial situation. Representatives from the Transport and Housing Bureau and Civil Aviation Department met with the airline’s management on Nov. 1 and demanded the company worked to improve its financial position. The Air Transport Licensing Authority, which has the power to revoke flying rights, has also expressed concern about the airline.
“ATLA is of the view that HKA’s financial situation has shown no sign of improvement,” the licensing body said last month, warning that it would “consider taking appropriate action” if no progress was made.
Months of anti-government protests have compounded the airline’s woes, weighing heavily on passenger traffic, while Hong Kong’s economy, already under pressure from the U.S.-China trade war, is in recession as tourist numbers plummet. The unrest has disrupted transport networks and temporarily paralyzed the airport in August, prompting Hong Kong Airlines at the time to say it would adjust services.
“Hong Kong Airlines was probably hit the hardest by the social unrest among the four carriers in Hong Kong,” said Ivan Su, an analyst at Morningstar Inc., noting that the airline has high exposure to mainland routes and is less able to offset a decline in travelers with revenue from international flights. “Still, it is a surprise to see that the company even struggles to pay staff,” he said.
The situation in Hong Kong remains delicately poised. Street battles between demonstrators and armed police have eased, but there are still tension spots, such as Hong Kong Polytechnic University, the scene of a two-week standoff. U.S. President Donald Trump this week signed legislation expressing American support for the protesters, prompting China to threaten retaliation.
Hong Kong Airlines cut some operations earlier this month and plans to cancel Los Angeles-bound flights from February. Other airlines have been affected by the unrest too. Cathay Pacific Airways Ltd. is one of the most high-profile business casualties, issuing profit warnings and coming under fire from the Chinese government as well as protesters.
Cathay will cut seat capacity 1.4% next year, according to an internal memo seen by Bloomberg News. In September, the company still planned to expand capacity by 3.1% next year, according to the document.
The reduction is “absolutely necessary because we don’t believe that in the current environment we can continue to operate a full schedule profitably,” Chief Executive Officer Augustus Tang said in the memo.
Meanwhile, Singapore Airlines Ltd., China Eastern Airlines Co. and Virgin Australia Holdings Ltd. all cut flights to Hong Kong, which is in danger of losing its status as Asia’s busiest airport for international traffic.
“Hong Kong Airlines has been in a relatively weaker position compared to bigger rivals such as Cathay even before the unrest,” Morningstar’s Su said.
“This one-off salary arrangement does not impact our daily operation,” Hong Kong Airlines said. “Our staff remains professional and are committed to delivering a safe and smooth service to all our customers.” Bloomberg

Berlin’s long-delayed airport finally has an opening date. The German capital’s BER airport will have its inaugural flight on Oct. 31 next year, the operator Flughafen Berlin Brandenburg GmbH said Friday on Twitter. That’s at least eight years behind schedule.
The story of BER is an embarrassing tale for Germany’s exalted engineering prowess. While construction started in 2006, its planned launch in June 2012 was scrapped a month before its unveiling because of fire safety issues, and has since been pushed back multiple times.
Defects had included automatic doors that lacked electricity, escalators that were too short, and a smoke-extraction system so complex, yet ineffective, it was dubbed “the Monster,” according to daily tabloid Bild.
Berlin desperately needs the new airport as Tegel and Schoenefeld, the city’s two existing airfields, are overflowing as an increasing number of tourists and business travelers flock to the city. The government in 2008 closed Tempelhof — the historic facility where Allied planes landed in the Berlin Airlift — and it plans to do the same with Tegel once BER begins operating.