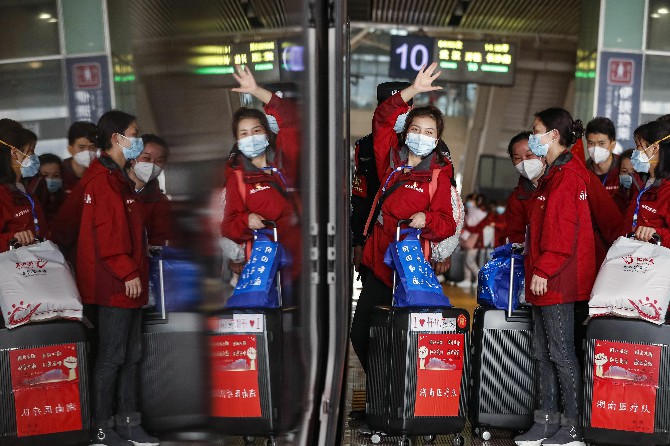 Back in China’s Wuhan, where the virus first appeared, asymptomatic people are still testing positive for it— four days after the country said there have been no new cases at the epicenter of its outbreak, according to an article in Caixin magazine.
That raises concerns that the virus could still be spreading in the city. Asymptomatic carriers appear to be able to trasmit the virus to others, according to experts, complicating efforts to stop its spread.
Unlike other countries like South Korea, which counts everyone who’s tested positive as a confirmed case, China does not include asymptomatic infections in its official count.
Across the world, scientists are calling for urgent studies to determine the proportion of people with coronavirus who show no, or delayed, symptoms amid similar concerns that the number of silent carriers may be greater than previously thought.
China’s Hubei province said it will allow transportation to resume for the city of Wuhan on April 8, effectively lifting a mass quarantine over the city where the coronavirus first emerged last December.
People in Wuhan will be allowed to leave the city and Hubei province, according to a statement on the provincial government’s website yesterday.
The easing of restrictions comes as Hubei reported that new infections dropped to zero on March 19, a dramatic plunge from the height of an epidemic that’s infected more than 80,000 Chinese and killed over 3,200.
President Xi Jinping has been projecting confidence that his government has stemmed the outbreak in China. On March 10, Xi visited Wuhan, the capital of Hubei, for the first time since the disease emerged. But with the virus is accelerating its spread globally and Europe now reporting more cases than China, the world’s second-largest economy will struggle to resume full activity.
China on Jan. 23 took unprecedented steps to lock down Wuhan and surrounding regions, effectively restricting the movements of 60 million people in Hubei province as infections spun out of control.
The measures stopped air and rail travel and restricted those who could leave by car, while harsher measures banned large gatherings and sought to keep residents in their homes. Some critics saw the quarantine as a heavy-handed approach following earlier failures to act quickly enough to stem the spread. As the virus spread globally, other countries including Italy, the Philippines and India have begun nationwide lockdowns.
Though Hubei’s quarantine may have averted hundreds of thousands of cases, according to the World Health Organization, it put coronavirus patients in the province at a much higher mortality rate than other regions. As cases in Hubei multiplied, hospitals were overwhelmed by patients and a dearth of supplies, forcing them to turn away people with other critical illness.
Chinese officials have been moving to ease the quarantine in steps as new cases dropped toward zero from a peak of 15,000 a month ago. Hubei last week started allowing some residents in lower-risk areas to leave the province for work. According to local media reports, people have to get a “green code” certification proving they are in good health in order to leave.
On the same day as Xi’s visit earlier this month, all patients were discharged from the mobile hospitals in Wuhan, which the government built temporarily to quarantine and treat mild-syndrome patients when the hospitals were overloaded with patients.
China still has a long road back to recovery, and there is a risk the highly-infectious pathogen could flare up again. Even as Hubei’s numbers have dwindled to single digits, China is facing another concern as imported cases continue to add to the country’s tally of infections.
China’s economy has been hammered by the outbreak and the aggressive containment measures. Troubled companies like HNA Group Co. have required state rescue while China is loosening financing rules liberally to keep its millions of small businesses alive through the crisis. MDT/Agencies