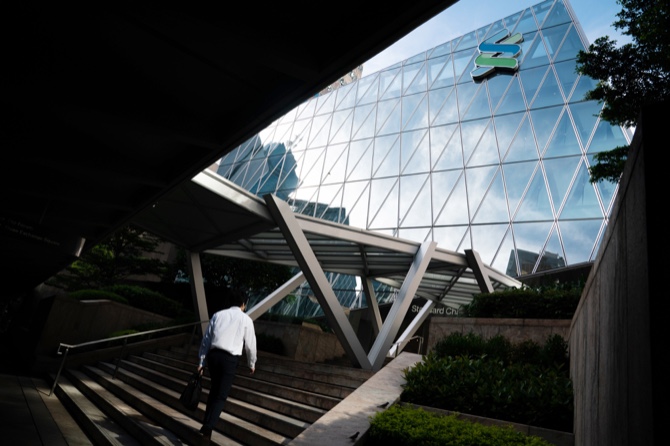 Standard Chartered Plc is weighing a plan to simplify its structure as the emerging markets lender looks to control costs across its sprawling network from Zambia to Macau, said people familiar with the matter.

The London-based bank, which operates in about 60 markets, is exploring how to free up liquidity and reduce funding expenses within its different legal entities, the people said, asking not to be identified as the details are private.

Standard Chartered said in a statement to Bloomberg that it will outline how it plans to “deliver higher returns” when it reports its full-year results in February, without elaborating on the details. The lender is expected to unveil a strategic review to address investor concerns about rising expenses and an approximate 40 percent decline in the share price since Bill Winters became chief executive officer in June 2015.

Winters is still seeking to convince investors he can revive longer-term earnings growth and generate an acceptable level of profitability while cutting costs. He’s spent much of his tenure cleaning up the balance sheet and culture of the London-based firm, which had been saddled with bad loans.

“The bank’s weakness in returns is due to costs that are too high,” Edward Firth, a U.K. bank analyst at Keefe, Bruyette & Woods in London, said by email. “Centralizing funding costs sounds like an opportunity,” but there are likely to be hurdles involving tax and local regulatory requirements, he said.

As part of the review to be announced in February, the bank is also considering cutting the number of senior posts, one of the people said. The bank had around 86,000 staff at the end of last year, up from about 84,000 in 2015. It’s also still pressing ahead to create two Asian hubs – one based in Singapore and another in Hong Kong, they said.

Meanwhile, the lender is also reviewing its African businesses and may opt to focus on some core countries, the people said. Standard Chartered operates across a vast network in Africa including smaller economies such as Sierra Leone, Ivory Coast and Cameroon, according to its website. The bank makes the bulk of its income from its China and North Asia businesses.

As part of the review, the bank is also closely examining part of its private bank. It plans to keep its focus on the wealth management segment, the people said.

Standard Chartered’s Winters said in October that the lender was working on a three-year plan to improve performance. Its return on equity was 6.6 percent as of the third quarter. The bank said earlier in the year that 8 percent was achievable in the medium term.

Details of its plan are yet to be finalized as the lender is still waiting to hear from the Department of Justice over a potential fine related to previous Iranian sanctions imposed by the U.S.

The bank has said that it continues to cooperate with U.S. authorities on resolving the Iran sanctions probe, and that it’s too early to provision for any likely fine. Bloomberg News earlier reported that the bank was bracing for a potential penalty of around USD1.5 billion for allowing customers to violate the sanctions.

Any plan to reward shareholders with a buyback, which was reported by the Financial Times this month, is likely on hold until there is a settlement with U.S. prosecutors, the people said.

Standard Chartered’s underlying profit was $1.07 billion in the third quarter, ahead of a consensus estimate of $976 million, as the bank managed to squeeze out more growth from Asian markets. Ambereen Choudhury, Stefania Spezzati, Bloomberg