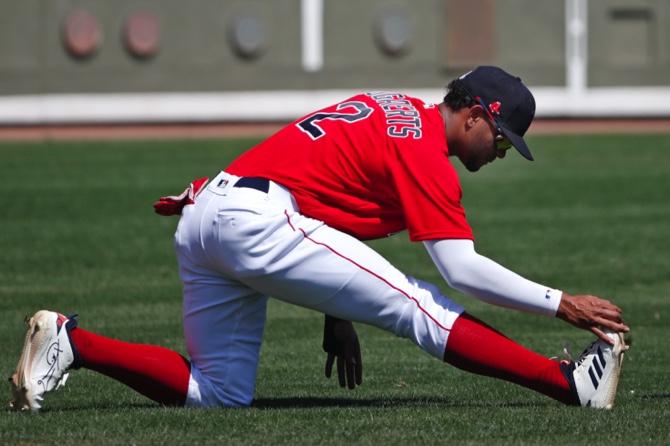 He’s been a fixture for so long in the Boston Red Sox lineup that it seems hard to believe Xander Bogaerts is only 27.

Signed as a 16-year-old in Aruba, a two-time World Series champion and now with a contract that could take him through the 2026 season.

Over time, the All-Star shortstop has become the second-longest tenured player in the Red Sox clubhouse. With Dustin Pedroia out of camp as he deals with a setback in his rehab from a knee injury and contemplates his career, only center fielder Jackie Bradley Jr. — called up earlier than Bogaerts in 2013 — has been with the Red Sox longer.

“Because of the confidence and probably because of the success that leads to the confidence, he’s starting to be a leader in that clubhouse,” manager Ron Roenicke said. “And he certainly is with the Latin players. He’s been a big influence on them. But I think he is on everybody. His attitude, the way he walks in everyday, for me, makes a big difference.”

“When you talk to him he’s always in a good mood, he’s always smiling, and he works. And that’s important for us as a staff to not always have to be the ones that try to talk to guys and pump them up and get them, whether it’s working hard or working the right way. If their peers do it, it’s huge,” he said.

“I don’t want to be someone else or put up numbers like someone else. I think that’s when the pressure comes,” he said. “I just know how I play the game and what I’m capable of and just continue to strive to become great and I think that’s always a motivation factor and trying to be the best and people recognize that.”

With 2018 AL MVP Mookie Betts traded to the Los Angeles Dodgers, Bogaerts’ bat is a key to Boston’s production.

“When I talk about a deep lineup, he helps push that lineup back to where it’s tough to get through all nine,” Roenicke said. “Whether I put him at third or fourth or I know he likes fifth also, that’s a tough five guys to get through.”

“So, what he did last year, I know in ‘17 he had a big year offensively, ‘18 good again, last year big. He’s becoming a real consistent offensive threat, not just in homers but in average, driving in runs, and that allows us to put him pretty much anywhere in the lineup,” he said.

Bogaerts’ ability to speak four languages — English and Spanish as well as Dutch and Papiamento, the languages of his native Aruba — enables him to easily act as clubhouse ambassador for new players. And, with so many new faces and young players in camp, it’s a role he takes responsibly. AP