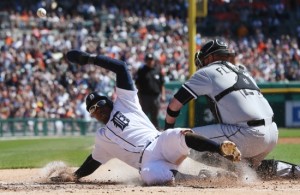 Chicago White Sox catcher Tyler Flowers misplays the throw from center fielder Adam Eaton to allow Detroit Tigers’ Rajai Davis to score from third on a single by Miguel Cabrera during the first inning of a baseball game, in Detroit

Melky Cabrera capped Chicago’s four-run ninth inning with an RBI single off Cody Allen to send the White Sox to a 4-3 victory over the Cleveland Indians yesterday (Macau time).
Six consecutive batters reached safely before Cabrera drove a fastball into left-center for the game-ending hit. Alexei Ramirez doubled home two runs and Gordon Beckham had a tying RBI single.
David Robertson (1-0) worked a perfect ninth for his first win with the White Sox. Allen (0-2) recorded just one out in his first blown save in four chances.
Chicago had managed just four hits before the big finish.
Boston’s Justin Masterson benefited from five unearned runs as the Red Sox beat the Baltimore Orioles 7-1 in a soggy Patriots’ Day game shortened to six-and-a-half innings by rain.
The first pitch was thrown at 11:04 a.m. under cloudy skies on the Massachusetts holiday after Boston Marathon runners already were on the course that passes close by Fenway Park. Rain began falling steadily in the fourth and intensified, and the game was called after a 1-hour, 42-minute wait.
With the score tied at 1-1, Boston scored four runs in the third when Chen Wei-yin (0-1) walked four and made an error, and third baseman Manny Machado committed another error.
In Pittsburgh, Kris Bryant turned his tiebreaking two-run double into a homer with some heads-up baserunng as the star rookie had three hits and three RBIs to lead the Chicago Cubs past the Pirates 5-2.
Bryant’s double off Arquimedes Camninero (0-1) hit off the base of the left-center field fence in the seventh inning and snapped a 1-all tie. He advanced to third base on the throw home, and raced across the plate when catcher Francisco Cervelli missed the throw for an error.
The Detroit Tigers edged the New York Yankees 2-1 after J.D. Martinez and Yoenis Cespedes hit consecutive RBI singles in the seventh inning, and Joba Chamberlain got Jacoby Ellsbury to hit into a crucial double play in the eighth.
CC Sabathia (0-3) faced the minimum number of hitters through the first six innings, but with two out and a man on second in the seventh inning, the Yankees intentionally walked Victor Martinez. J.D. Martinez followed with a sharp single that shortstop Didi Gregorius was unable to keep in the infield, and Cespedes’ single scored Martinez.
In other games, Edinson Volquez dodged trouble for seven innings as the Kansas City Royals scored two runs on wild pitches before pounding the bumbling Minnesota Twins 7-1, the Cincinnati Reds downed the Milwaukee Brewers 6-1, the San Diego Padres trounced the Colorado Rockies 14-3, the Oakland Athletics defeated the Los Angeles Angels 6-3 and the Houston Astros were 7-5 winners over the Seattle Mariners. AP