Basketball | Sweet! Parker has cupcakes made to raise voter awareness 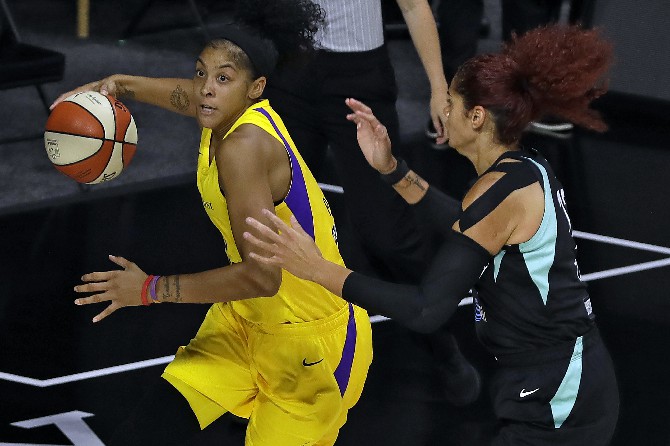 Candace Parker was a freshman at Tennessee the first time she voted in a U.S. election.
It left a lasting impression on her ,and now 16 years later she’s hoping to get others to understand the importance of voting too.
“I really do feel that as a society that I hope we really explain to our youth and people that are at that age that are about to vote how important it is,” Parker said in a Zoom call Monday night. “Make it as exciting as when you turn 21 you get a drink, at 18 you get to vote. it’s a huge responsibility and privilege.”
Parker admits that she has missed some of the local elections because of travel to play overseas in Russia in the winter, but has voted in every presidential election. She says she doesn’t plan on missing the chance to vote in any election going forward.
The 13-year WNBA veteran is also trying to get others to vote as well, teaming up with Sprinkles Cupcakes to celebrate Women’s Equality Day and commemorate the 100th anniversary of the 19th Amendment that was ratified on Aug. 18, 1920.
It’s also the 55th anniversary of the Voting Rights Act, which gave all women, including black women, the right to vote.
“It’s a huge statement and huge for everybody to recognize it wasn’t always that everyone could vote,” said Parker, who admits she’s a huge consumer of the cupcakes. “Obviously recognizing the past so that we can change the future a little bit and how important it is for us to exercise our right to vote.”
Parker recalled in amazement how nearly two decades before she was born black women still couldn’t vote.
“It blows my mind looking at history, thinking it was so long ago but its not. Reading up on it and hearing it. has made me read a lot more,” she said. “We still have a long way to go.”
The Candace Parker cupcakes will be available for a few days and come in two designs — one with rainbow sprinkles, the other with a basketball in the center. Each has “Exercise your right to vote” as well as a bicycle on them. Parker, a student of history, explained how the bikes were important in the women’s suffrage movement. Sprinkles is donating 100 cents to vote.org for everyone of Parker’s cupcakes that are sold in honor of the 100th anniversary.
Parker is proud of the work the Los Angeles Sparks have been doing for social justice. The organization announced a “Change has No Offseason” program last month that’s focused on combating systemic racism and sexism through initiatives focused on voter registraion and education and immigration reform.
“I think it’s really important for us, being part of the WNBA, which the longest-running women’s sports leagues that’s ever been in America to really promote change and to let people know that we hear them and we’re with them.” DOUG FEINBERG, AP