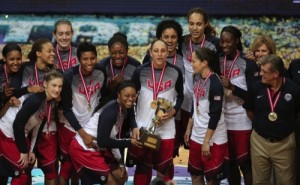 The United States basketball players and coach Geno Auriemma, right, pose with their trophy and gold medals following their victory over Spain in the Basketball Championship Women’s final at Fenerbahce Arena in Istanbul, Turkey

After dominantly winning another world championship, the U.S. women’s basketball team left no doubt of the gap between the Americans and the rest of the world.
And with so much young talent in the system, it might be a while before anyone can catch up.
Maya Moore scored 18 points and earned MVP honors as the Americans beat Spain 77-64 to win a second straight world title.
With Moore, Brittney Griner, Tina Charles and a host of others still yet to reach their primes, it’s a scary thought.
“This was a great first taste,” Griner said. “It leaves me hungry for more. I’m going to pin this medal up on my wall. It’s the biggest thing I’ve ever won.”
With the exception of the Australia game, when Griner got in early foul trouble, the 6-foot-8 star was exceptional in making the all-tournament team. She had the first dunk in tournament history in the opener against China and dominated on both ends of the court.
“She has potential to be one of the best ever,” coach Geno Auriemma said. “She is very coachable and picks things up very quickly.”
Next up for the Americans is the 2016 Olympics in Rio. There’s no reason to think they won’t be a heavy favorite for a sixth straight gold there.
That Olympics could be the last go-round for Sue Bird and a few others, but with the young core still intact, as well as players like Chiney Ogwumike, Breanna Stewart and Elena Delle Donne in the pipeline, it will be hard to see the U.S. not continuing this run for a long time.
Bird became the most decorated player in world championship history with Sunday’s gold. She has won three gold medals and a bronze in her career.
“It was a great win for us,” Bird said. “We had one goal the entire time this team’s been together and that’s win a gold medal. A lot of people see a lot of talent and think it’s going to be easy and it’s not. Whenever you can win a gold medal and it’s a tough journey, everyone’s happy. I’m definitely proud of this team.”
Lindsay Whalen added 12 points for the United States (6-0), which hasn’t lost in a gold-medal game in the world championship since 1983, when it was beaten by the Soviet Union 84-82. Except for a hiccup in 2006, when the Americans lost to Russia in the semifinals, they have won every Olympic and world championship game since 1996. If not for that upset in Brazil, the U.S. would have five straight world titles.
“I know when I hear 2006, it still makes me mad.,” Bird said of her only bronze medal.
The Americans jumped out to a 13-point lead in the game’s first 4 1/2 minutes. Spain (5-1) could only get within seven the rest of the way.
Moore was the key in that early burst, scoring 11 points during the opening 18-5 run. Her 3-pointers barely moved the net as the Americans blitzed Spain, which was making its first appearance in the championship game.
“It’s always a focus, we want to punch first,” Moore said. “I put pressure on myself and the starting five, we put pressure on ourselves to get a good start, set the tone for the game.”
The Spaniards rallied within 24-17, but then Whalen took over. She had nine points during a 13-0 run by the Americans spanning the end of the first and start of the second quarter to make it a 20-point game. Whalen ended the first quarter with a spectacular drive that ended with a floater in the lane right before the buzzer.
“We knew that we had to come in and provide a spark and I had an aggressive mentality,” Whalen said.
The Americans led 48-29 at the half and by 25 points in the second half before Spain closed the game with a 14-2 run.
“It’s sweet to have a silver medal around your neck as we are one step closer to a gold,” said Sancho Lyttle, who led Spain with 16 points. “But it also hurts because we know we were almost there.” Doug Feinberg, Basketball Writer, Istanbul, AP