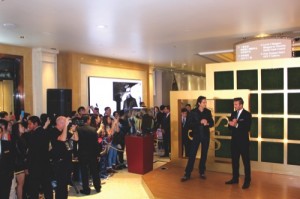 It has been nearly a year since David Beckham first joined the bustling hospitality industry in Macau in partnership with Sands China. On his return to the region last weekend, the famed British sportsman showed his intent of “bringing enjoyment in different areas” for visitors who come to town.
Talking about his partnership with Sands, Beckham stressed that “it’s been very successful so far” and is set to be a “long-term relationship.”
“Everything that we’ve done is on a high level, on a level that has made people happy and people enjoy,” he told the Times in a question and answer session held on Saturday.
“I think what we’ve tried to do, especially on my side over the last five years, is go from being the face of the sponsorship of things into ownership, part-ownership and being partner with these brands,” the global icon revealed.
“It’s not something like a year-or-two relationship; it’s a long-term relationship. This is something where we are looking to make things bigger, to make things better and to bring enjoyment to people in many different areas,” he added.
The partnership is based around developing dining, retail and leisure concepts at Sands’ properties in Macau. Last Saturday, Beckham visited the renewed Shoppes at the Four Seasons, where a crowd of admirers was thrilled by his appearance.
When a fan told Beckham, “you’ve been my idol since I was five years old,” the star blushed bright red and gave him a hug. The former sportsman said he wanted to set a good example for his children that their father is still working hard despite retiring as a football player.
Speaking of what he has in common with his business partner, Beckham said, “I love the way that Sands look after the people, look after the staff, look after the charities as well. And that’s one of the things why I was very excited and interested to be involved with Sands.”
Having served as a UNICEF ambassador for a decade, Beckham acknowledged that charity is what gives him “the most enjoyment and satisfaction” other than his family and the soccer field.
“It always has been the most important thing to me. Either while I’ve been playing or in my life, the thing that I get most out of is being part of the different charities I’ve been part of over the years. It’s something that I enjoyed the most, something at the end of my career I was looking forward to doing the most,” he said.
The star also recognized a significant change in Macau since his first visit to the city about two years ago, adding that seeing new things happening on every visit is a reason why he’s always enjoyed coming back.
“It’s a place that’s changing so quickly and so rapidly, and every time I come back here, even though I was here a month ago, it feels that things have changed and got bigger,” he told the Times.
Speaking of his impression of the “Macau lifestyle” that he’d recommend tourists to experience, Beckham said it’s simply the “enjoyment of coming here.” “There’s a place you can go and find great food, great shopping, great nightlife and obviously the casinos,” he explained.
“But it’s surrounded with great people. It’s a place where people are so friendly, and people come here to enjoy themselves. So it’s somewhere every time I come, I have fun, I eat great food,” he added.

David Beckham’s eldest son Brooklyn Beckham has been signed to a short-term contract by Arsenal. The teenager’s two brothers Romeo and Cruz already play in the club’s youth set-ups. Brooklyn was wanted by both Manchester United and Chelsea, but after showing his skills at the Gunners’ training ground, he was quickly snapped up until the end of the season. An Arsenal source said that the 15-year-old “is talented and he has stood out in all of the training sessions and games he has played.” There is the potential for a long-term deal for Brooklyn if he continues to shine on the pitch for the under-16s.