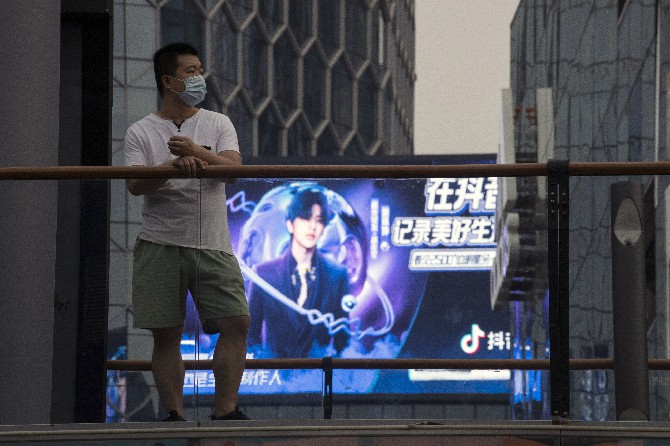 China yesterday outlined a slate of rules designed to prevent foreign governments from acquiring data stored locally, seeking to counter Washington’s accusations that services like TikTok and WeChat share sensitive user information with Beijing.
Foreign Minister Wang Yi unveiled the proposals governing global data security after raising the plan with his Group of 20 counterparts last week, part of China’s attempts to set global standards for the digital sphere. They involve forbidding governments from gaining access to data acquired by companies’ overseas operations, according to a statement posted on the ministry’s website.
The guidelines reinforce Beijing’s long-held concept of data sovereignty, or limiting information flow across borders, an idea gaining momentum as concerns over national security increase. The Trump administration has banned ByteDance Ltd.’s TikTok and Tencent Holdings Ltd.’s WeChat and sanctioned Huawei Technologies Co., accusing them of sharing Americans’ data with the Chinese government.
“To reduce the deficit in global digital governance, countries face a pressing need to step up communication and coordination, build up mutual trust and deepen cooperation with one another,” Wang said in the statement.
Washington’s moves against TikTok and WeChat underscore how the concept of an internet decoupling is becoming reality. The control of data — everything from private details like locations and emails to sophisticated mined information such as personal profiles and online behavior — is a key facet of China’s broader concept of cyber-sovereignty.
The world’s No. 2 economy already requires foreign companies store data domestically, which is why the likes of Apple Inc. and Amazon.com Inc. have built massive datacenter operations in conjunction with local partners.
The Trump administration has sought to set up “clean networks” to prevent China from accessing user data, arguing that Chinese law compels companies to share information with authorities in Beijing. Secretary of State Michael Pompeo highlighted the trust deficit in remarks last month.
“You have to distrust them,” Pompeo said when asked if the U.S. can trust China. “You have to challenge everything that they say. You need to go verify it when they make a promise.”
There are now few global standards governing cross-border data flows. China wants to fill the gap, saying it’s willing to contribute its “wisdom.” Data security should be viewed “objectively and rationally” to maintain “open, secure and stable global supply chains,” it said.
Under the proposal, Beijing won’t require Chinese companies to share data from overseas operations in violation of another nation’s laws.
Information technology wouldn’t be used to damage other countries’ critical infrastructure or steal important data, the ministry said. Tech companies would not build backdoors into their products and services to illegally obtain user data – something Washington has accused Huawei in particular of doing, and that the Chinese company has repeatedly denied.
The plan also called for measures to prevent and stop the infringement of personal data, and said technology shouldn’t be abused to conduct large-scale surveillance of other countries or illegally collect personal information of citizens. Cross-border data retrieval by law enforcement should be resolved through judicial assistance and other channels, the proposal said. Bloomberg