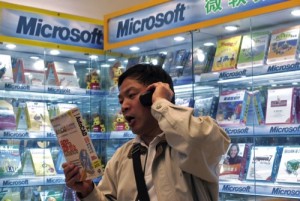 China is expanding efforts to rein in what authorities say is tax evasion by foreign companies, with Microsoft Corp. being required to pay more than USD150 million, according to a person familiar with the matter.
The payments – including 840 million yuan ($137 million) in back taxes, interest and more than 100 million yuan in additional annual disbursements going forward – were detailed in a Nov. 23 report by the state-run Xinhua News Agency, which stopped short of naming the company involved. That company is Microsoft, according to the person, who isn’t authorized to speak publicly and asked not to be identified.
Microsoft can’t confirm that it was the subject of the Xinhua report, the company said in an e-mailed statement.
The case, which Xinhua said was the biggest since China joined an international anti-tax-evasion program last year, follows a series of regulatory and law enforcement actions against foreign companies operating in the country. Global car manufacturers, food companies and technology companies, including Microsoft, have faced antitrust probes this year, leading trade groups to complain about unfair treatment.
The Xinhua report comes a week after Chinese President Xi Jinping called for greater global cooperation to clamp down on tax evasion. He spoke during a Nov. 16 speech at the Group of 20 summit in Brisbane, Australia.
The Xinhua report referred to the company as “Corp. M,” described it as being one of the world’s 500 biggest corporations and as having a wholly owned subsidiary established in Beijing in 1995 – details that match Microsoft.
The company drew government scrutiny because its China subsidiary has reported losses, even as its peers saw gains, the Xinhua report said. An investigation found that the unit had transferred more than half its profits to its U.S. parent as franchise fees, according to the article.
Microsoft said in its statement that it operates in China under an agreement with local tax authorities.
“In 2012, the tax authorities of China and the U.S. agreed to a bilateral advanced-pricing agreement with regards to Microsoft’s operations in China,” Microsoft said. “China receives tax revenue from Microsoft consistent with the terms of the agreed advanced pricing agreement.”
Microsoft has agreed to stop the practice that led to China’s investigation, according to the person familiar with the matter.
The State Administration of Taxation is developing a system to track profit indicators of multinational corporations, according to Xinhua. Revenue recovered from tax-evasion cases rose to 46.9 billion yuan last year from 460 million yuan in 2005, according to the report, which cited a tax official named Liao Tizhong.
In July, the State Administration for Industry and Commerce said it began probing whether Microsoft’s Windows operating system and Office software violate China’s anti-monopoly law. Bloomberg