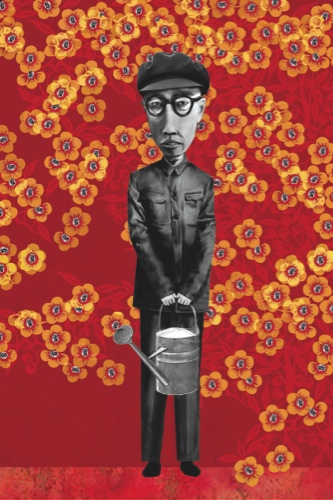 Macanese artist Victor Marreiros today launches his exhibition, “Beyond Pixels,” at Signum Living Store. His sources of inspiration are as wide as the world itself. He takes inspiration from everyday happenings, from the Portuguese ‘Carnation Revolution,’ to the 9/11 terrorist attacks in New York. The simplest of things, such as a representation of a Chinese neighborhood or a pack of cigarettes, are also present in the digitally produced artworks that will be on display until the end of this year.
“These are works that I have been developing since 2001; some have already been exhibited before, but others have not,” he told the Times, adding that Signum Living invited him to gather a few pieces and launch this new exhibition.
Marreiros has selected about 40 of his digitally produced artworks, including an extremely diverse range of themes. Some of the images are all about characters that some of us will recognize. Portuguese writer Camilo Pessanha, who lived in Macau, is represented in his artwork, Marreiros said.
The smoking regulations in Macau were also a source of inspiration for his pieces now on display.
Some other images were produced in his free time, whenever he thought a certain event was worth reporting, or when something was really funny.
His artworks have taken inspiration from both the East and the West. However, the artist does not want to unveil too much, he said: “One of the images is related to Chinese cigarettes, and then I talk about a Chinese neighborhood that could exist in China, or in Macau; I don’t like to explain the artworks.” 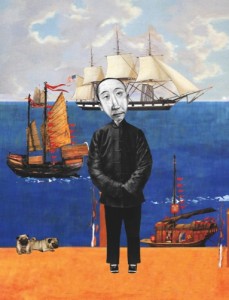 Marreiros stressed that his favorite way to express thoughts, ideas, or to talk about everyday happenings is by exploring visual arts – drawing, painting or photography. However, this time, he has chosen to explore digital arts, in particular. “[The exhibition] has a digital coherence. These are artworks produced by resorting to a computer [program]. It can be photography, or drawings that are then introduced into a computer program,” he explained.
Victor Marreiros is a multi-
award-winning artist, currently serving as art director at the Cultural Affairs Bureau (IC). As an artist, he has participated in exhibitions not only in Macau, but also in Portugal, mainland China, Hong Kong, Taiwan, Brazil, Sweden, Japan and Singapore, among many other cities.
Co-organized by Macau Closer, the exhibition opens today at 7:00 p.m. in Signum Living, a store located in Rua do Almirante Sérgio.