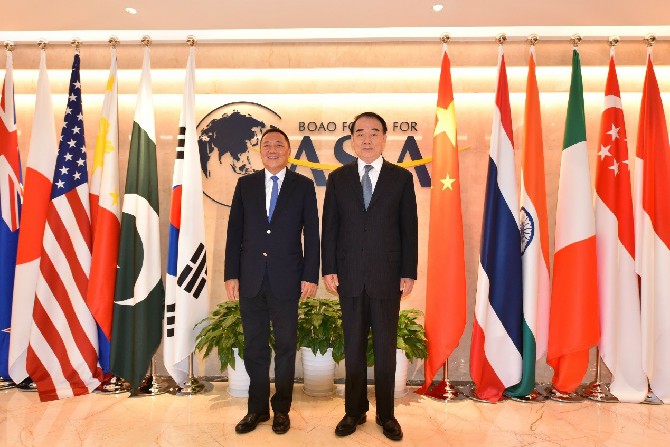 Former Secretary for Economy and Finance, Lionel Leong, had a meeting last week with the secretary-general of Boao Forum for Asia (BFA), Li Baodong, according to a statement released by the organization, hinting that Leong will take up a leadership role at BFA imminently.
This meeting marked the first public appearance of Leong at a major political event since his departure from his former position in the government.
On September 9, Leong met with Li at the Secretariat of BFA in Beijing, according to the statement. The meeting took place even though this year’s BFA annual assembly is canceled.
During the meeting, they discussed matters related to Macau. The BFA secretary-general praised Leong’s contribution to Macau’s prosperity during his service to the SAR government.
Although this year’s BFA annual meeting was canceled due to the Covid-19 pandemic, some of the organization’s scheduled events, particularly those involving Macau, will take place as scheduled. Li revealed the details of these events to Leong.
In November, BFA will organize the first edition of an international conference on science, technology and innovation which will take place in Macau. Li introduced Leong to BFA’s current preparations for the conference.
After ten months out of the public eye, Leong’s reappearance at BFA, one of China’s most high-profile forums, is said to be indicative of his imminent appointment to a position in the Boao Forum board, according to sources familiar with the matter who spoke to the Macau Daily Times.
Evidence of Leong’s possible participation as a pivotal leader in BFA can also be seen in his reply to the statement’s comment on the aforementioned conference.
Leong noted his belief that the conference will bring Macau crucial opportunities in the development of economic diversification, and in building the Greater Bay Area into an influential global science and innovation center.
The same announcement noted that Leong and Li exchanged opinions on the Greater Bay Area development and the cooperation between BFA and Macau SAR. JZ