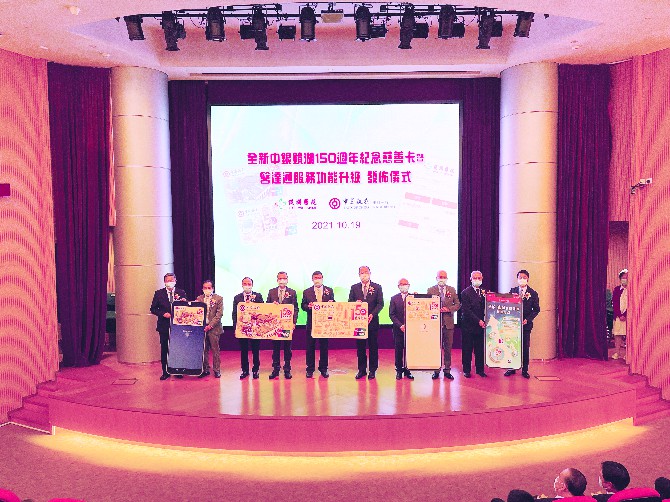 A new set of credit and debit cards issued by the Bank of China, Macau Branch (BOC) was unveiled yesterday to celebrate the 150th Anniversary of the Kiang Wu Hospital Charitable Association.
The BOC and the Kiang Wu Charity Association have, prior to yesterday, co-branded a UnionPay credit card. For every spending made with the card, 1% is donated to the charity association as part of the operational fund of the private hospital.
It was revealed that the donation scheme will continue for the new set of cards. The main difference is that this new batch of cards includes a UnionPay debit card, which, according to both entities, is more suitable for some clients.
At the press conference, the BOC introduced that Nam Tung Bank, the predecessor of the BOC, has been strongly supporting the Kiang Wu Hospital with monetary donations for over a century. This is the background of the new credit and debit cards.
The press conference also saw the upgrade to the medical service booking functions on the BOC cellphone app, which is officially known as the second phase of the upgrade.
The second phase of the app upgrade includes booking, payment and service progress areas.
For example, the app does not only make payments for medical services received at the private hospital, but now also accepts other payment methods, such as Alipay, credit and debit cards. Meanwhile, the BOC app can now make payments in mainland China.
Furthermore, the booking function has its coverage widened to cover all departments of the hospital and all doctors practicing. Previously, bookings were only taken for medical services at the First Outpatient Department.
After the upgrade, users will also be able to get a hold of the queuing progress at each department, so that they can arrange their time accordingly.
On another topic, the BOC was designated one of the seven Macau banks to run Mainland-Macau financial services, which leads to greater convenience for individuals who want to invest in the Mainland stock markets.
Chan Hio Peng, vice president of the BOC, Macau Branch, revealed yesterday that many related inquiries have been received. He thinks the new service will be beneficial to the flows of funds within the Greater Bay Area. It will also expand the scope of investments of residents from both the Mainland and the two Special Administrative Regions. In his opinion, it will also help the internationalization of the Chinese currency.