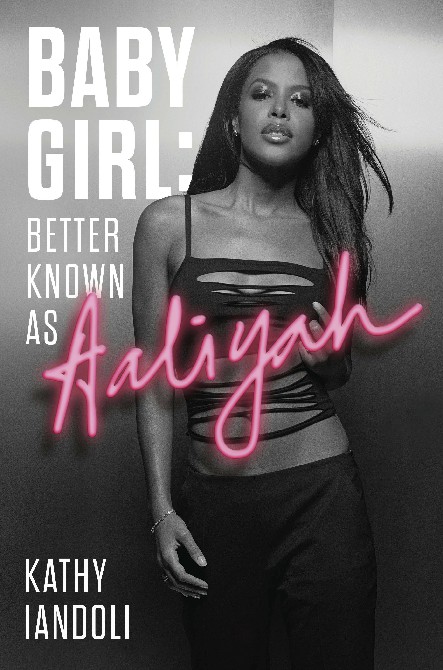 R&B singer Aaliyah is best known for two events that bookended her career: becoming involved with infamous singer R. Kelly as a teen, and the tragic plane crash that ended her life at age 22, just days before 9/11.
“Baby Girl: Better Known as Aaliyah,” by veteran music journalist Kathy Iandoli, aims to fill in the story between those two events, for Aaliyah fans new and old. The book traces Aaliyah’s musical development and collaboration with many different R&B producers and artists, her burgeoning film career, and indelible imprint on fashion. But 20 years after her death, a sense of Aaliyah’s personality still remains elusive.
With a silky smooth voice, Aaliyah Haughton was signed for a record deal with her uncle in Detroit when she was just 12. Two years later, she teamed with R. Kelly to make her first record “Age Ain’t Nothing But a Number.” She became involved with R. Kelly and the two were secretly married when Aaliyah was just 15. Her parents discovered this and quickly annulled the marriage.
But the scandal tarnished Aaliyah’s reputation more than R. Kelly, who is currently on trial for sex trafficking charges stemming more than two decades. She was portrayed as a teen seductress rather than one of the first of R. Kelly’s many victims.
The scandal led to Aaliyah becoming extremely private in ensuing years, but she kept recording hit records. She teamed with then-unknowns Timbaland and Missy Elliot for her second record “One in a Million,” which has sold 8 million copies worldwide.
Meanwhile, she was making her mark in the fashion and movie industries. Her signature style of a crop top or bandeau top paired with baggy jeans, with long hair partially covering her left eye, is emblematic of her “sweet but street” style and still emulated today. She had roles in the movies “Romeo Must Die” and “Queen of the Damned” and was set to act in the “Matrix” sequels before she died.
Aaliyah’s “Try Again” beat out Britney Spears’ “”Oops!… I Did It Again” video and Christina Aguilera’s “What a Girl Wants” to win best female video at the MTV video awards in 2000, another sign she was poised for super stardom.
But that was not to be. On August 25, 2001, Aaliyah died in a plane crash in the Bahamas, where she was shooting a music video for her third and final self-titled album, “Aaliyah.” The plane was found to be badly overloaded.
For years, Aaliyah’s music has been unavailable on streaming platforms, with the exception of her first album, “Age Ain’t Nothing But a Number.”
But following a fan campaign on social media with the hashtag #FreeAaliyahMusic, Blackground Records said it plans to release the albums to streaming services on Aug. 20, in time for the 20th anniversary of Aaliyah’s death. The move is not without controversy. Aaliyah’s family estate does not support the release.
But it will give a new generation of fans an easier way to hear more of Aaliyah’s body of work. And “Baby Girl: Better Known as Aaliyah” should serve as a useful companion to those discovering Aaliyah’s music for the first time via these platforms. MAE ANDERSON, MDT/AP