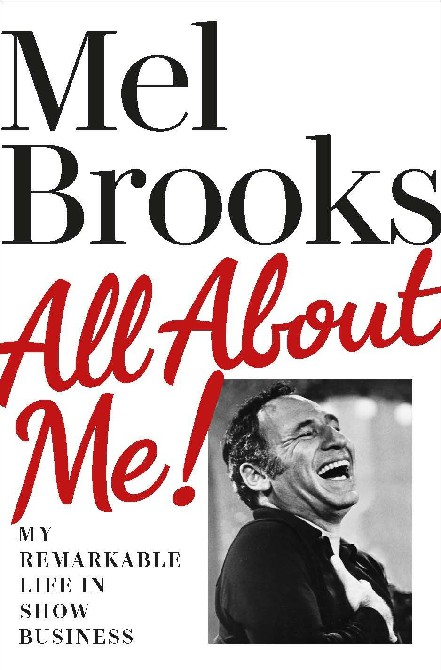 Bagels and Nova Scotia lox for the writing team’s breakfast while punching up the script for “Blazing Saddles.” Earl Grey tea and English digestive biscuits while developing Gene Wilder’s idea for “Young Frankenstein.” Cottage cheese topped with fruit while hashing out yet another writer’s pitch for “Silent Movie.”
Besides an uncanny memory for food, Mel Brooks has the skill of an alchemist turning the base metal of others’ ideas into comedy treasure. But the lead comes before the gold. With the notable exception of “The Producers,” Brooks’ greatest hits have been a team effort that usually began as a nugget in someone else’s mind.
In his new memoir “All About Me!” the unmatched self-promoter, now 95, generously shares the credit… most of the time. Look elsewhere to hear a different side of the Mel Brooks story — some of his collaborators have grumbled about being elbowed aside as he grabbed all the glory he could. The same goes for his personal life — his first marriage is barely noted in spite of three children and years of litigation — and anything else that might cast a shadow on the beloved funny man.
As advertised, “All About Me!” is a narrowly focused celebration of a poor Jewish kid who grew up from Brooklyn street corner jokester to become synonymous with hearty laughter and naughty chuckles. It’s a surprisingly gentle remembrance from a comedian known for mocking anything considered sacred in America.
The entertainment world was an escape for Melvin Kaminsky, the youngest of four brothers whose father died when Melvin was 2 and whose mother worked hard to get enough pennies for a movie ticket. His stint at a Catskills resort as a clownish teen (contrasted with harrowing months defusing bombs in the wake of the the Battle of the Bulge) followed by a postwar Army assignment to an occupation entertainment unit helped make his heavenly dream more earthbound.
Brooks refined his talent for comedy during his first big break, writing for Sid Caesar’s “Your Show of Shows” and “Caesar’s Hour” series during TV’s Golden Age. Lean years followed, but Brooks kept at it, thanks to his “2,000-Year-Old Man” routine with Carl Reiner, co-creating TV’s “Get Smart” and writing and directing his first film, “The Producers” (1968), which he adapted decades later into a Broadway juggernaut.
Along the way Brooks met the likes of Cary Grant (debonair but dull), John Wayne (he thought the script for “Blazing Saddles” was hilarious but too dirty for an appearance by America’s Favorite Cowboy) and Alfred Hitchcock (the Master of Suspense kept Brooks hanging on whether he thought “High Anxiety” was insult or homage — he finally sent a note with a case of fine wine). And there was actress Anne Bancroft. Her unlikely attraction to Brooks’ off-kilter personality resulted in that rare Hollywood production, a durable marriage.
To avoid confusing ticket-buyers, Brooks kept his name off his production company’s non-comedies “The Elephant Man,” “Frances,” “The Fly” and other top-notch films. His all-too-brief discussions about the business side of the movie business — he demanded foreign rights to his later pictures and was rewarded with more money than he earned domestically — are welcome asides.
Anyone looking for introspection will be disappointed. While Brooks celebrates his reputation for “dangerous” comedy, he’s taking no chances with today’s hot topics. Look elsewhere for Brooks to muse over whether “Blazing Saddles” with its liberal use of the N-word would survive in our politically correct culture (no, he has said). Reconsidering the misogyny and homophobia that were part of his generation’s comedy canon just isn’t on the menu.
Yes, too much of “All About Me!” is self-congratulatory — if Brooks isn’t praising himself, he quotes others praising him — and, yes, recounting plots and casts for his films comes off as superficial. His memoir works best, which is more often than not, as a look back in laughter from a man who isn’t through trying to make us gasp for breath. DOUGLASS K. DANIEL, MDT/AP
Douglass K. Daniel is the author of “Anne Bancroft: A Life” (University Press of Kentucky).