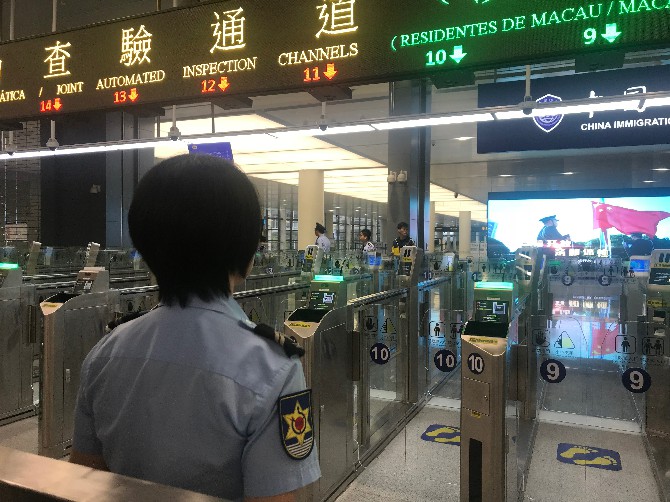 The Novel Coronavirus Response and Coordination Center announced yesterday that a 24 hour period ending at noon today will be crucial for the implementation of the announced easing of border crossing restrictions between Macau and Zhuhai.
This measure’s implementation depends on the results of the ongoing nucleic acid tests (NAT) being undertaken by people that wish to cross the border. Restrictions will not ease unless all turn out to be negative, Dr. Tai Wa Hou, medical director of the Conde de São Januário Hospital Center said in response to a media question.
“Today [Monday] is a decisive day for the border reopening. People are now doing NAT and only 100% negative results would allow the measures announced earlier by Zhuhai authorities to take effect at noon-time [Tuesday],” Tai remarked.
Earlier in the same press conference, Dr. Leong Iek Hou, Coordinator of the Center for Disease Control and Prevention, had already mentioned that if any of the NAT results turn out positive, “the border will not reopen tomorrow [Tuesday] noon.” She added that this was the condition imposed by Zhuhai authorities.
Leong also explained that, following negotiations with Mainland authorities, there are three groups of people that will still be ineligible for a quarantine exemption on the border crossing into Zhuhai.
She explained that among these three groups are people considered of high risk such as “people that have had direct contact with people arriving in Macau from high or medium risk areas, people that work on the handling of non-disinfected shipped goods, airline staff that might be in contact with people coming from high or medium risk areas, such as cabin crew and also those that work in the quarantine hotels or other venues or those that work in medical services related to the treatment of patients infected with Covid-19.”
Under the new rules from noon today, travelers crossing the border Macau-Zhuhai will be exempted from quarantine, needing only to present a certificate of a negative NAT taken within 48 hours.

No vaccination needed
Unlike previous occasions, Zhuhai authorities did not request that travelers provide proof that they had received at least one dose of a Covid-19 vaccine.
In response to several questions on the topic at the regular health press briefing, Tai explained that the conditions imposed now are different from the previous occasion, noting that, unlike this time, border crossing was allowed before a 14 day period without cases detected had elapsed.
Tai added that negotiations are still ongoing in an attempt to grant further advantages to those that are vaccinated, such as an extended validity period of the NAT beyond the 48 hours is now required from everyone.
However, Tai did not want to confirm whether the proposal is to extend this validity back to the original seven days for vaccinated travelers.
Further questioned on the topic, Tai tried to refute the idea that the previous requirement for a certificate of inoculation with at least one dose of the vaccine was a joint effort among authorities from both sides to push some people, namely cross-border non-resident workers, to get vaccinated.
For Tai, different measures are justified in different situations, and adjustments are made taking into account the situation on the ground at any given time.
Tai also cleared the local side of any responsibility for the decision, stating that it was a unilateral requirement from Zhuhai authorities.
“This is a Zhuhai city measure aiming to ensure the safety of the people of Zhuhai so that Macau people do not bring the virus from Macau into Zhuhai,” the official said.