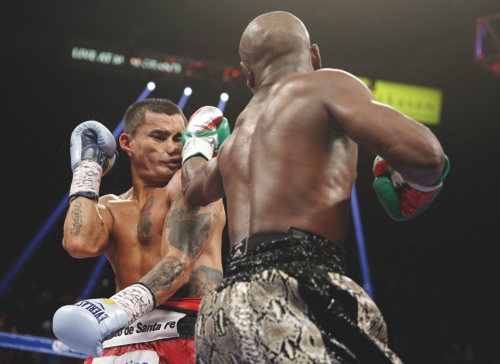 Floyd Mayweather worked far too hard against Marcos Maidana their last time out to have to do it again in the rematch Saturday night.
Mayweather dominated Maidana from the opening bell, using his boxing skills to keep the Argentine off balance and pile up points on his way to a unanimous 12-round decision to retain his welterweight and super welterweight titles before a crowd at the MGM Grand that sometimes booed the lack of action.
It almost came at a cost, though, in a bizarre scene in the eighth round when Mayweather claimed that Maidana bit him on his wrist while they were in a clinch near the center of the ring.
“He bit me!” Mayweather yelled to the Showtime announcers working ringside.
Mayweather remained unbeaten in his remarkable 18-year pro career, winning for the 47th time and doing it with such dominance that about the only one complaining about the decision was Maidana.
“I was pressuring him and I was the aggressor,” Maidana said. “I won the fight.”
Mayweather earned at least USD32 million for the rematch, bringing his total purses to more than $100 million in the last year. Though he wasn’t marked up, he was upset over the bite.
“We were tangled in the center of the ring and I didn’t realize what it was. Then I saw that he bit me,” Mayweather said. “After the eighth round my fingers were numb, I couldn’t use my left hand.”
Maidana denied he bit Mayweather.
“How can he say I bit the glove with my mouthpiece?” Maidana asked. “I’m not a dog.”
The fight was a marked contrast to their first bout in May, when Maidana roughed Mayweather up in a close fight. Mayweather won that bout, but it was close enough for Mayweather to offer an opponent only the second rematch of his career.
Maidana won’t get a third fight after failing to land any big punches.
Two ringside judges scored it 116-111 for Mayweather, while the third had it 115-112. The Associated Press had it 117-110.
“I felt sharper in the first fight, my rhythm was off,” Mayweather said. “I got hit with some shots tonight I shouldn’t have gotten hit with. But that comes with the sport.”
Mayweather complained long after the first fight that Maidana was a dirty fighter, and complained even more when Maidana seemed to try to hit him below the belt in a clinch in the eighth round, then apparently tried to bite him.
Mayweather immediately jumped back and gestured to referee Kenny Bayless that Maidana bit him on the wrist. He went to his corner and showed Bayless where the bite was, then went over to the Showtime announcers table to complain.
Maidana would later be penalized a point for tackling Mayweather as he tried desperately to find something that would work.
By the end of the ninth round, Maidana was so out of sorts he went to the wrong corner when the bell rang.
Maidana spent many of the early rounds trying to figure out a way to get inside like he did in May. Mayweather kept him at a distance, circling around and landing left jabs and hooks, then scampering out of the way before Maidana could respond.
Punch stats showed Maidana throwing far more punches (572-326) while Mayweather landed more (166-128). Mayweather’s was hit with only 22 percent of punches while landing 51 percent of his own.
“I do have some bumps and bruises,” Mayweather said. “But I listened to my dad (trainer Floyd Mayweather Sr.) who always said hit and not get hit. That’s the way you last in this sport.”
Mayweather was a 6-1 favorite in the fight, even though Maidana gave him a tough time in their first bout. He showed why in the early rounds as he moved and boxed while Maidana chased him futilely around the ring.
Mayweather was determined not to let the fight become anything like the first, when Maidana went after him wildly and mauled him at every opportunity. For the second fight, Mayweather came out boxing and did so beautifully during the opening rounds.
Maidana was more cautious early than he was in the first fight, willing to take his time to find Mayweather. He finally began to pick up the pace in the fourth round, trapping Mayweather on the ropes and landing some shots to his body and head.
Mayweather, though, showed he learned his lessons from the first fight, when he was cut over his right eye and took a lot of shots to the top of his head. A defensive wizard, he fought moving sideways and backward, throwing his left jab out and slipping the big punches thrown by the Argentine challenger. Tim Dahlberg, Las Vegas, AP