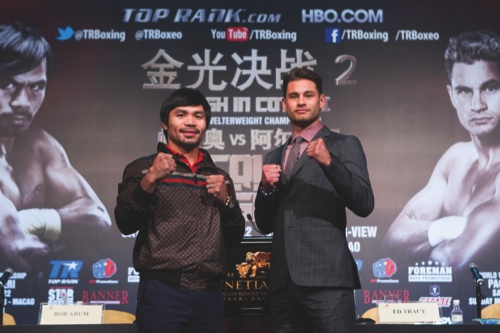 As Filipino boxing legend Manny Pacquiao prepares for the upcoming Clash in Cotai II on November 23, he yesterday told reporters that his opponent, American WBO junior welterweight champion Chris Algieri, is an “an okay fighter.” Nevertheless, Manny Pacquiao recognized that it will be “a tough fight” since Algieri is faster than last year’s contender Brandon Rios.
Chris Algieri was a relatively unknown contender until he won the WBO light welterweight title in a split decision. Despite having suffered two knockdowns in the first round, which closed his right eye, Algieri went on to claim the world title.
The 30-year-old former kickboxer has another passion besides fighting; he has gained a Bachelor of Science degree specializing in Health Care Management, and a master’s degree in Clinical Nutrition. He says that he is planning on pursuing medical training after he finishes his boxing career.
In a press conference held yesterday at the Venetian Macao, Chris said that fighting Manny Pacquiao in Macau is a dream. In facing the Filipino boxing legend, Algieri gave assurances that he is going to be as prepared as possible.
Manny Pacquiao urged the public to attend Clash in Cotai II as “it will be a tough fight.” “Algieri is undefeated and he is a good boxer; he’s tough. So I am expecting a good fight, as my opponent is tough. He is faster and taller than Brandon Rios [last year’s Clash in Cotai contender]. He will give me a hard time,” he reiterated.
Speaking to reporters earlier, Manny said that his contender “can box.” “I’m not saying he’s really good, but he’s not bad. He’s okay.”
At the press conference, Top Rank promoter Bob Arum spoke of how Manny, Algieri and Chinese boxing star Zou Shiming continue to inspire people across the globe. He said that all of them will come to the Cotai Arena on November 23 because all of them share a dream.
“I have devoted my entire life to promoting boxing. There’s something about it that is like a dream… fighting the best and rising to the top of boxing,” he stressed, adding that while Algieri holds the American dream, Zou Shiming and Manny Pacquiao hold the “Chinese and the Filipino dreams” respectively.
“Manny has been a great inspiration to me, and to all people in the Philippines (…) [He taught us that] no matter how great you’ve become, the thing that makes you a great human being is the ability to look back to where you came from, and to give back [something] to your country and [fellow] countrymen (…) He glorified boxing,” Bob Arum said.
Freddie Roach, Pacquiao’s trainer, revealed that they will be training Manny in Los Angeles, and warned Algieri: “Chris has many masters, but Manny has a PhD in boxing.”
Yesterday morning, he told reporters that Algieri’s height and reach worry him, but that they can overcome such obstacles in the ring. “Algieri has a good reach advantage and we’re going to have to get past that and his jab. That will be our biggest problem, but we have ways to do that,” he stressed.
Pacquiao also acknowledged that his contender’s height poses an issue, but he assured reporters that he will be using his “speed and footwork” throughout the bout.
On the other hand, Manny’s well-known speed is Algieri’s greatest concern. Speaking to reporters, he expressed that his trainer has been choosing boxing partners that are also fast to practice with.
“The thing about Manny is that he’s very fast, but we are choosing partners [to train with] that are going to be fast (…) I’m a fast guy too. I am not as concerned as someone like Brandon Rios, who was not really known for speed,” he stated.
Returning to Macau after last year’s fight, Manny revealed that he feels excited for this second bout, as he expects a lot of Filipino fans to watch Clash in Cotai II and cheer him on. “The first time I fought here I was surprised by the fans’ support, not only from the Philippines but from [all] Asia too,” he said.
In the press conference, chief executive officer of Sands China Edward Tracy said “Macau is Manny’s second home.”
Both contenders traveled to Macau to kick-off a promotional tour that will include stops in Shanghai, San Francisco, Las Vegas, Los Angeles and New York.
Manny Pacquiao fights Chris Algieri on November 23 (November 22 in the U.S.) at 8:00 a.m. at the Venetian’s Cotai Arena. The bout will be produced and distributed live in the United States by HBO Pay-Per-View.
Tickets for Clash in Cotai II go on sale this Friday at 10:00 a.m., in all Cotai Ticketing box offices.

Bob Arum announced yesterday that WBO featherweight champion Vasyl Lomachenko will be fighting Chonlatarn Piriyapinyo on the undercard of Pacquiao vs Algieri.