Breach of safety protocols by security guards reason for contagion 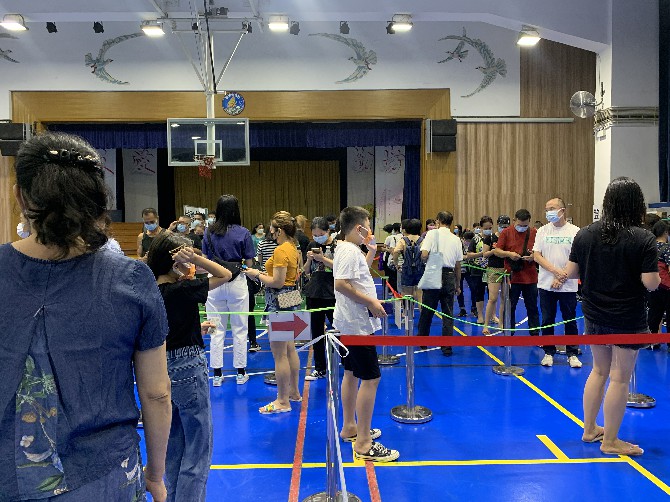 The breach of safety protocols by on-duty security guards at the Golden Crown China Hotel resulted in the contagion of two staff members, who have been classified as case numbers 65 and 66 of Covid-19 infection in Macau.
The revelation came yesterday from director of the Health Bureau (SSM) Dr. Alvis Lo during the regular Covid-19 media briefing.
The two workers were working on the floor where the third newest patient– publicly known as Case No. 64, a returnee from Turkey – was being quarantined. They had the responsibility of taking body temperature.
According to Lo, following the investigation conducted by the health authorities, it was ascertained that both infections occurred due to contact with Case No. 64 while not wearing the personal protection equipment (PPE) properly — namely the improper usage of facemasks.
“We can confirm that the source of the infection is the 64th case and, according to footage from surveillance cameras that we requested of the quarantine venue, the contagion would have happened when the two security guards had direct contact with the infected patient while using their facemask incorrectly. They were wearing facemasks but not properly,” Lo said in his reply to an inquiry from the media.
The SSM director also added that the health authorities are evaluating the situation to see how they can prevent similar cases from happening in the future.
Dr. Leong Iek Hou, coordinator of the New Coronavirus Contingency Coordination Center, added that, on principle, workers at quarantine hotel venues should not have any contact with people undergoing medical observation and — in cases where the avoidance of this contact is impossible — it should be minimized.
“Regarding the security guards, we [the health authorities] have issued particular instructions to them. They must wear PPE at all times and use it correctly,” she said. “Also, cleaning staff has specific guidelines as well as for meals distribution and all that. All [guidelines] state that no contact should happen between staff and people in medical observation.” She noted that meals should be left by the room doors and people in quarantine can be informed via a phone call to the room that the delivery has been completed.
Regarding the details of the improper usage of facemasks, Leong said that it was possible to see in the surveillance footage that the two guards working on the floor of case number 64 had direct contact with him on several occasions while their facemasks were not covering their noses, and sometimes not even their mouths, as the mask was underneath the chin.
“We verified that this happened when they had contact to measure temperature,” Leong added.
Lo added that it is already confirmed that the three new cases are infected with the delta variant of Covid-19.
“The two cases, linked to the imported case, are all in a stable situation and undergoing treatment at Coloane’s Public Health Clinical Centre. For the time being, none of the patients has had a fever or any other symptoms of the disease,” Lo informed.

Hotel may face consequences over rule-breach
When questioned by the media, representative of the Macao Government Tourism Office (MGTO) Liz Lam admitted that the Golden Crown China Hotel might face sanctions over the breach of the safety protocols which resulted in a potential community contagion. Said infections have led to a second round of mass testing for the whole population in Macau.
Lam added that regular inspections are being conducted to the quarantine venues. If the situation arises that a flaw is detected during one of these inspections, the MGTO issues a warning to the hotel. She also admitted that there is a sanction mechanism for the “more severe cases.”
The official also noted, regarding the sanctions to be imposed on the hotel, that the “MGTO is evaluating together with the SSM if these breaches are a violation of the Law for Prevention and Control of Infectious diseases,” hinting that added sanctions could come from such evaluation.
Previously, Lo has said that such behavior is cannot be excused by a lack of knowledge, as the SSM had provided both instructions and training to all the staff of quarantine hotels and regularly reminds them of their duties.
“We have been training them on how to prevent contagion and maintain distance. We will react to this and we will talk with the hotel to reinforce the safety. We will reinforce on this matter with other hotels,” Lo said, adding that the flaw might have also been caused by a relaxation on the enforcement of some procedures due to a long period of no cases in Macau.
“This is not lack of training nor lack of knowledge. Just sometimes practice is harder to enforce especially if there is a long time without any cases. We might see some loosening of the rules,” he said. “Still, we cannot have inspectors for each worker, this is a responsibility of the companies [hotels] to their workers.”
“Quarantine hotels have a potential risk. We know this. This is why we need to inspect the hotels to ensure that they are adequate to receive people under quarantine,” Lo concluded.

Sheraton Grand Macao hotel will resume operation as a quarantine hotel venue, the Macao Government Tourism Office confirmed yesterday during the Covid-19 briefing.
The hotel will supply a further 2,000 hotel rooms for use as quarantine so as to meet an expected increase in demand for medical observation facilities.
Sheraton Grand Macao stopped its role as a quarantine facility in late July.
It was the first major hotel unit to be designated by the government as a quarantine facility back in March 2020.
Since then, the hotel has been in and out of the quarantine venues list, being called on to exercise these duties each time the authorities expected a sudden surge in demand for quarantine hotel rooms.