Kevin Pietersen was made to wait eight months before having his say on the termination of his turbulent international career with England. The wait is over — and the ramifications of his response are rocking English cricket. The sporting agenda in Britain this week has been dominated by the fallout from the release of Pietersen’s explosive autobiography, in which the country’s most brash and controversial cricketer takes aim at former teammates and management. Among the most damaging of Pietersen’s allegations are that a clique in the England side bullied and intimidated teammates and that his international coach ruled “by fear” and “had it in for me.” 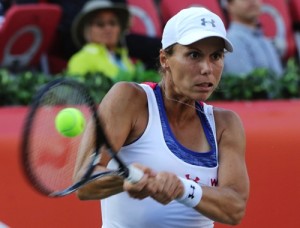 Varvara Lepchenko (pictured) and Alison Riske set up an all-American quarterfinal match at the Tianjin Open with straight-set wins yesterday. The fourth-seeded Lepchenko defeated 18-year-old Chinese wild-card entry Liu Fangzhou 7-6 (3), 7-5, while the sixth-seeded Riske beat Olga Govortsova of Belarus 6-4, 7-6 (3). Also, Sorana Cirstea of Romania beat Andrea Hlavackova of the Czech Republic 6-3, 6-0, and Ajla Tomljanovic of Croatia defeated Tianjin native Duan Ying-ying 6-4, 6-4. Jelena Jankovic is the top-seeded player at the tournament, one of three events added to the WTA Tour calendar in China this year. She plays her second-round match against Zheng Saisai today 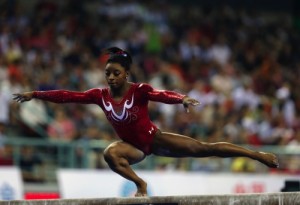 World all-around champion Simone Biles (pictured) led the United States to the gold medal in the women’s team event at the gymnastics world championships yesterday. The U.S. finished with a total of 179.280 points to defend the title it won at the 2011 worlds in Tokyo. Host China was second with 172.587, followed by 2010 champion Russia with 171.462. The U.S. has dominated international competition for most of the last decade and used a victory at the 2011 worlds to propel it to the top of the podium at the London Olympics. Biles survived a rare wobble on the balance beam and scored 15.375 in the final rotation on the floor as the U.S. wrapped up a convincing win over China.