Personnel from the Macau Marine and Water Bureau removed around three tones of dead fish floating off Fai Chi Kei’s north bay  yesterday morning. The authorities cautioned the nearby residents to avoid consuming the deceased fish, as it might be harmful health. It was the second time this year in which the bay saw massive shoals of fishes floating in the water. In March, complaints from local residents emerged over an unpleasant odor lingering in the sea before the first massive fish death. 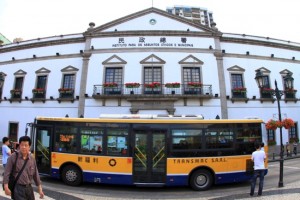 Transmac buses to run on new contract early next year

Bus operator Transmac has reached consensus with the government over the future implementation of a brand new contract, which is expected to come into force early next year, TDM radio reported. The group’s executive revealed that, aside from the government’s subvention, part of the fare would also be invested into the company. However, no details on the agreement were available, except for the group’s desire to recover part of the service fees on which they had missed out previously thorough the subsidy. Additionally, the authorities’ agreement with another bus operator TCM took effect this month, with both parties satisfied with the starting price that determined how much the government paid to the group.

The position of Marine and Water Bureau vice president has been awarded to Chou Chi Tak amid an ongoing investigation carried out by the Commission Against Corruption, which has focused on two staff members at the managerial level of  the bureau. It was believed that one of the individuals under investigation was the former vice head. As early as April this year, Chou, who previously managed a department, already assumed the acting position. Additionally, Chan I Un rose to the head of the Maritime Museum. Both appointments were made by the Secretary for Transport and Public Works, Raimundo Rosario.