Residents’ deposits decreased by 0.8 percent month-on-month in July to MOP473.7 billion. MOP and USD deposits increased 3.4 percent and 7.7 percent respectively, while those in HKD and RMB decreased by 3.6 percent and 4.1 percent respectively. Non-residents’ deposits dropped 6.5 percent to MOP248.8 billion. Public sector deposits with the banking sector increased 1.0 percent to MOP122.9 billion. Total deposits with the banking sector fell 2.3 percent from a month earlier to MOP845.4 billion. Domestic loans to the private sector increased 2.2 percent from a month ago to MOP384.1 billion, while external loans grew 0.6 percent to MOP387.9 billion. The loan-to-deposit ratio for the resident sector at the end of July grew 1.6 percentage points from the previous month to 64.4 percent. Currency in circulation grew 1.4 percent while demand deposits dropped 16.4 percent. 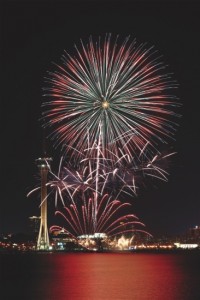 The 27th Macau International Fireworks Display Contest officially began on Saturday night, with the first show presented by the Malaysian team. The contest attracted many locals and visitors. However, the program encountered a setback when the second fireworks display by Grupo Luso Pirotecnia from Portugal was cancelled due to a delay in transporting the materials. The event will continue on September 12, 19, 27 and October 1. Similar to previous years, teams will operate their pyrotechnic shows with music and laser effects in a way that showcases their theme and enhances the audience experience. Famous pyrotechnic companies from around the world were invited to join. The first fireworks display starts at 9 p.m, followed by a second show at 9.40 p.m.

TCR Asian series debuts with MSAR  in the spotlight

The Asian series of the International Championship kicked off this weekend at the Sepang International Circuit, Malaysia, with the Macau-based Asian Racing Team (ART) establishing its dominance in the initial stages of the competition. Thanks to Macau’s Rodolfo Ávila, the team clinched its first win on Saturday’s (race 1) and made the 1-2 by Philippe Descombes, beginning its participation in this brand new series in the best possible way. Yesterday’s races 2 and 3 were similarly fortuitous, with  Descombes taking massive wins and scoring three victories in three races for ART. Hong Kong drivers Michael Choi (Prince Racing Honda) and Eric Kwong (Craft-Bamboo SEAT) also presented a strong opposition to the hegemony of ART. The TCR Asia Series will be back on track for its second round from the 18th to 20th of September in the streets of Singapore.