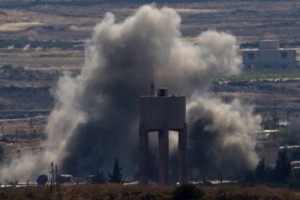 Syria’s state news agency and opposition activists say shelling in and around the capital has killed at least 18 people. Syria’s state-run SANA news agency says two shells struck Arnous Park in Damascus late Tuesday as many people were out shopping ahead of the Muslim holy month of Ramadan, expected to begin today. It says the shells killed nine people and wounded 13. The shelling came after government forces fired rockets into the rebel-held Damascus suburb of Douma. The Britain-based Syrian Observatory for Human Rights said yesterday that the government fired Iranian-made “elephant” rockets on Douma, killing nine people, including two children and six women. Government forces and opposition fighters have exchanged shelling the past. Airstrikes, artillery and rockets have destroyed wide areas of the Damascus suburbs in recent months. 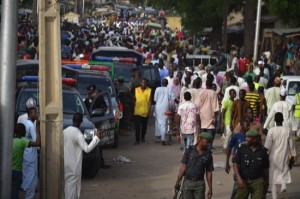 A sack of home-made bombs discovered at an abandoned Boko Haram camp exploded, killing 63 people in northeast Nigeria, civilian self-defense fighters said yesterday. Haruna Bukar, a witness to the blast, said the local militia was patrolling the area when they discovered the camp and found the bag of metal objects, which they carried to the nearby town of Monguno. As residents gathered around to examine the bag, it exploded, said Bukar. Scores of people have been killed this month in suicide and other bombings carried out by Nigeria’s homegrown extremists using these kinds of improvised explosive devices. Boko Haram took control of a large swath of northeast Nigeria until a multinational force this year forced them out of towns and villages. Nigeria’s military says the extremists are now confined to the Sambisa Forest.