A brilliant Redmayne as Stephen Hawking 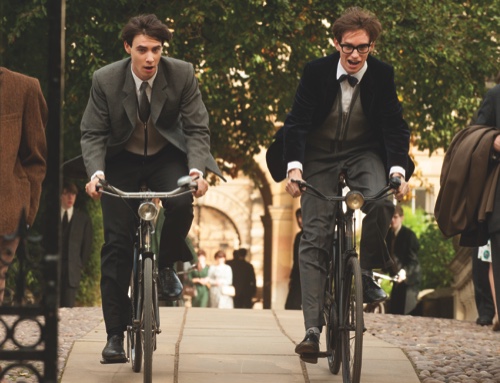 Harry Lloyd, left, and Eddie Redmayne as Stephen Hawking in a scene from “The Theory of Everything” 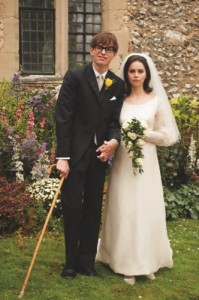 The famed British physicist Stephen Hawking has never had small ideas or small ambitions, least of all his audacious youthful quest to find a “theory of everything” — one that would explain the entire universe in one simple equation.
He may not have found exactly that, but what Hawking has accomplished, we learn anew in James Marsh’s “The Theory of Everything,” featuring a superb Eddie Redmayne, is staggering. Diagnosed with motor neuron disease at 21, Hawking was given two years to live. A half century later, he remains very much alive at 72, and he and his ideas are known around the world; his “A Brief History of Time” has sold more than 10 million copies.
It’s a daunting task to capture such a remarkable life in one movie, and “The Theory of Everything” doesn’t totally escape the typical biopic trap of covering so much time that no one idea is explored deeply enough. Add to that the pressure of having a subject as well-known as Hawking.
On top of it all, there are the physical challenges of portraying his progressive disability, while also channeling the bold, complex and often impish spirit underneath. All this makes the performance of the youthful, freckled Redmayne, at 32 playing his first lead in a movie, so exciting, and reminiscent of another British actor’s memorable performance at the same age — Daniel Day-Lewis, in “My Left Foot.”
We begin at Cambridge in 1963, with Stephen, a young graduate student in cosmology, exuberantly racing his bike around town, goofy and gangly, with huge black glasses and an oversized grin to match.
At a party, he spies the winsome Jane (Felicity Jones, thoughtful and touching here), and sets about pursuing her. Love blooms, and life’s possibilities appear as boundless as the universe — whether or not it has boundaries is a key question here — until Stephen starts experiencing marked clumsiness. After a bad fall, he’s diagnosed with ALS, which will result in gradual muscular degeneration.
“What about the brain?” he asks. “You’ll have the same thoughts,” comes the reply, “only eventually, no one will know what they are.”
Stephen falls into a deep depression, saved only by Jane’s stubborn love. Thus begins a marriage that will last a quarter-century, produce three children and test Jane’s physical and emotional endurance to the limits (the film is based on Jane Hawking’s second memoir, adapted by screenwriter Anthony McCarten.)
It will also survive Hawking’s near-death from pneumonia. A tracheotomy saves his life but deprives him of the ability to speak, leading to his famous computer-generated voice.
Redmayne, relying on less and less of his body, succeeds in expressing more and more — with his eyebrows, his eyes, and that broad smile, showing what a humorous man Hawking can be. He’s heartbreaking, though, in the scene where he essentially ends his marriage, informing Jane that he’s asked his perky nurse, Elaine Mason (Maxine Peake) to travel to America with him.
Elaine will become Hawking’s second wife. Jane, meanwhile, will marry a family friend to whom she’s grown close over the years. The various relationships feel somewhat airbrushed — perhaps not surprising given that the film is based on one person’s memoir.
What shines through loud and clear, though, is the humanity in Hawking’s incredible story. “However bad life may seem, where there is life, there is hope,” the physicist tells an audience, and that line could seem hokey in some circumstances, but not here. If anyone gets to say that, it’s Stephen Hawking, so eloquently embodied in this film. Jocelyn Noveck, AP.

“The Theory of Everything,” a Focus Features release, is rated PG-13 by the Motion Picture Association of America “for some thematic elements and suggestive material.” Running time: 123 minutes.