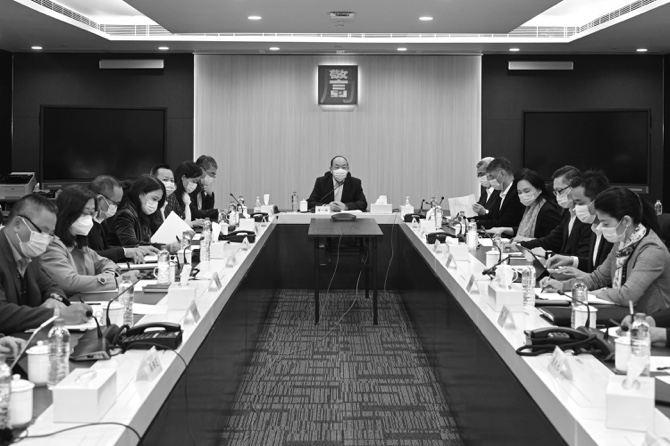 The Chief Executive Ho Iat Seng held a meeting on Saturday via videoconference with officials in Zhuhai in order to exchange views on pandemic control measures implemented in the two places, and the response to the new Covid-19 cases detected in places near to Macau.

During the meeting, the Secretary of the Zhuhai Municipal Committee of the Communist Party of China, Lu Yuyin, reported on the latest situation in Zhuhai regarding a fresh round of epidemic control and prevention work.

The Chief Executive additionally said that the day-to-day lives of around 6,200 people in Macau had been directly affected by the new Covid-19 cases recorded in nearby places, namely in Tanzhou Town in Zhongshan and in Nanping Town in Zhuhai. Those Macau people had seen their Macau Health Code status turn to ‘yellow,’ with 1,043 of them each either being required to undergo medical observation in Macau,  to self-isolate at home or to observe other special control measures, i.e., taking two nucleic acid tests within the space of three days.

During his briefing, Secretary Lu said Zhuhai had immediately conducted a mass nucleic-acid testing exercise after a case had been detected in  Zhongshan. Zhuhai’s area-specific mass testing covered 510,000 people in four areas neighbouring Tanzhou Town and had resulted as of this morning, in seven people testing positive for Covid-19, all with the Omicron variant. One case involved a person showing symptoms, and six involved people who were asymptomatic. Further action was taken during Friday, involving Zhuhai conducting nucleic-acid testing for the entire city. Of the 1.95 million samples collected, some 1.81 million (93.96% ) had already been assessed as negative for the infection.

Currently, only Nanping Town in Zhuhai was categorised as a restricted zone. LV