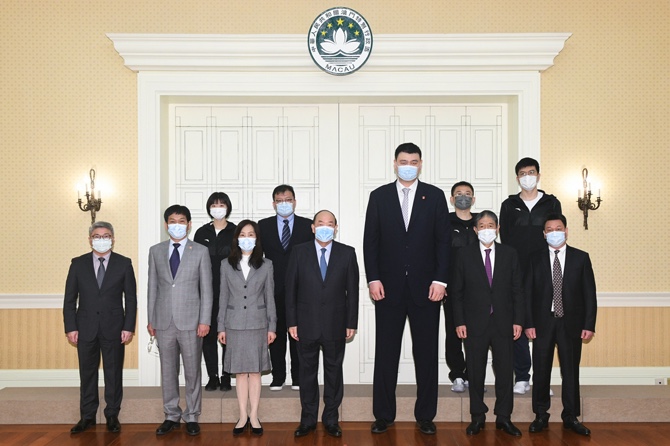 Known for his astonishing height of 2.26m, Yao is a former professional basketball player in the NBA.

According to a government statement, the topics of discussion included the promotion of sport in Macau and the city’s co-hosting of the 15th National Games of China. During the discussion, the CE sent his regards as the 2021 Men’s 3×3 Basketball Super League was held at the Macau East Asian Games Dome.

The CE also informed the CBA delegation that the government is seeking further economic development through sporting events, with particular reference to the organization of the National Games. “Athletes will have wonderful experiences in this world tourism and leisure center when they play matches in Macau,” Ho said.

In response, Yao pledged that the CBA will aim to host more events in Macau. He also thanked the local government for offering assistance with the CBA’s event calendar this year, stating that he trusted that Macau would be able to host the upcoming National Games.

The Secretary for Social Affairs and Culture, Elsie Ao Ieong, invited the CBA to join further collaborations in future. AL