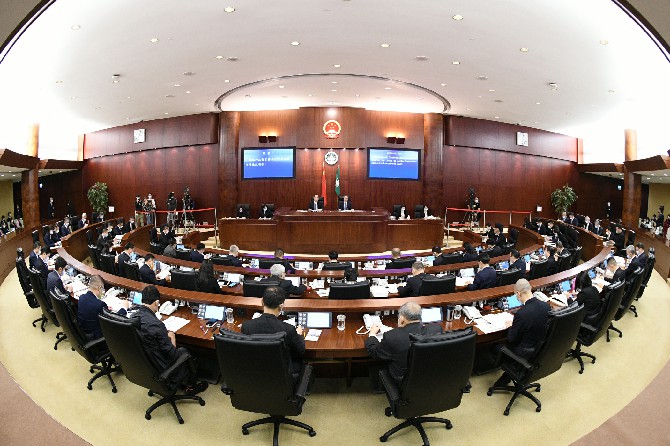 The government has no plans to provide the public with another round of financial support through electronic consumption methods, Chief Executive (CE) Ho Iat Seng confirmed. Ho made the statement at the Legislative Assembly (AL) yesterday, in reply to lawmakers’ inquiries on the Policy Address for 2022 (LAG22).
Responding to a question from lawmaker Ella Lei on the topic, Ho said, “if you asking me if we are going to inject money this year [on e-consumption], I can say that this year we are not going to do that.”
The CE further elaborated on the matter, explaining that the government cannot constantly inject money “in an unlimited way” through such a system.
“There are still funds available that people have not used yet [as the last round is valid until the end of the year]. I ask for the understanding of everyone [on this matter] because we have already invested almost 110 billion patacas in consumption cards and other expenses,” Ho remarked.
Visibly irritated by the question being raised, the CE remarked that people in Macau need to learn to solve problems on their own and cannot always depend on the government to solve their problems.
“Yesterday I already mentioned that there is great pressure for everyone due to Covid-19. But we need to have mutual understanding. People cannot continue by any [unjustified] reason asking the government to give them money to solve their problems,” Ho reiterated, adding that, when people are in extreme need, the government has always helped them and will continue to do so.
“Due to the latest outbreaks and loss of income of people [who were laid off or forced to take] unpaid leave, we [have] already taken measures to help those people,” the CE said, referring to the latest package of support measures. This includes the payment of 10,000 patacas to each resident who earned less than 144,000 patacas in the past year, that is, below an average of 12,000 patacas per month.
Acknowledging that he is well aware of the rise in the unemployment rate, he rhetorically asked if it is a duty of the government to take measures to compensate any person that “stops working for one day.”
“If residents have concrete and severe difficulties, we have mechanisms to help them. The government always supports them,” Ho concluded.
Addressing the same topic at Monday’s press conference after the delivery of the LAG22 in the AL, Ho had already stated that the government had considered replacing the annual cash handouts to residents with the e-consumption scheme, as a way to ensure that the financial support would be spent in Macau and not abroad.
At this time, Ho explained, and at least for the next year, this will not happen. The normal cash handouts of 10,000 and 6,000 patacas, for permanent and non-permanent residents respectively, will be processed in the same way as before.
Nonetheless, he hinted that a change to this method could be on the cards for 2023.