CE vows to study need for further support to SMEs 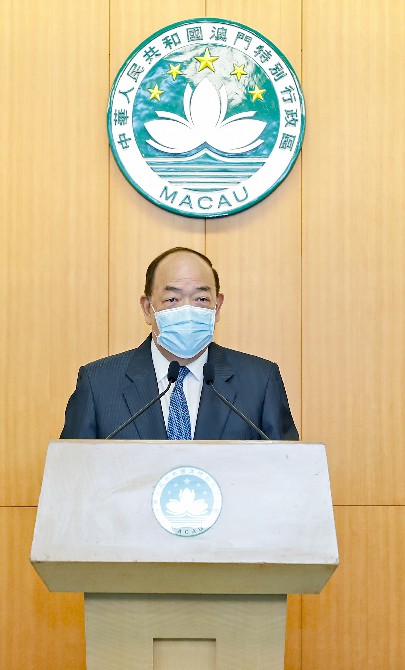 Chief Executive Ho Iat Seng has highlighted the government’s financial support for small and medium sized enterprises (SMEs) and promised to study the need for further support.
The disclosure was made in the head of government’s reply to written enquiries from lawmakers Wang Sai Man and José Pereira Coutinho.
A written enquiry was made necessary after the CE cancelled his question time at the parliament. About a month ago, the city saw four new cases of coronavirus infection. Due to the apparently worsening situation outlined by the Health Bureau, the Legislative Assembly and the head of government announced that question time would be cancelled.
Both Wang and Coutinho asked the CE about the government’s strategy for supporting local SMEs to survive the current crisis.
In response, the CE stressed that the government is aware of the economic impact of the pandemic on Macau. He first restated that the government has already released a measure of financial support to local SMEs, including the expanded coverage of the SME Subsidization Program, administered by the Economic and Technological Development Bureau (DSEDT). The bureau, he added, has also established interest subsidy programs and an extension of debt repayment.
Under the expanded initiative, the CE noted, SMEs subsidized under the SMEs Subsidy Program, the Youth Entrepreneurship Subsidy Program and the Typhoon Hato SME Special Subsidy Program will have the option to repay their debt in installments of MOP1,000 until the end of the year, with the difference being equally distributed among all remaining installments. The authorities have approved 4,468 such applications, amounting to a total of MOP157 million.
On the other hand, Ho said that the consumption subsidy scheme reinvigorated the market and “supported the development of SMEs.” The CE disclosed that the scheme has, as of July 31, injected MOP272 million into the market.
Ho also said that apart from financial support, the government has also offered operational training and consultation to local SMEs. Besides the DSEDT’s Distinctive Shops Program, the bureau has commissioned the Macao Productivity and Technology Transfer Center (CPTTM) to assist SMEs with technological improvements, such as social media marketing.
The CE said that authorities have tried their hardest to ease the impact of the pandemic on all walks of life. He added that government will consider extra financial support if necessary.

Acceptance of CAEAL disqualification ruling
In response to lawmaker António Ng Kuok Cheong’s written question on the allegations against him, Chief Executive Ho Iat Seng restated that the government respects the decision to disqualify 21 candidates from the election.
Ng is one of the 21 disqualified candidates.
The Legislative Assembly Electoral Affairs Commission (CAEAL) made the decision to disqualify the candidates based on allegations that they did not pledge allegiance to the Macau Special Administrative Region and uphold the Basic Law of Macau.
Some of the disqualified candidates turned to the Court of Final Appeal for their rights to be upheld. The court ruled in favor of the CAEAL; although one of the judges inserted a declaration, signaling that he only partially agreed with the judgment.
Ng therefore put the question to the CE.
Ng accused the government of using its public authority to collect pictures of the concerned individuals and to construe the materials in a “critical and hostile” manner.
He added that the authorities have subjectively misinterpreted patriotic sentiments and interpreted them as disloyalty. “Through this, the authorities have deprived the individuals of the rights of political participation,” Ng said in his written question.
Replying to the disqualified candidate, the CE stressed that the CAEAL is an independent body. Nobody, including the CE, has the right to interfere with its operations.
He reiterated that the CAEAL used its power under the relevant laws to censor candidates’ qualifications. Its decision to make the disqualifications safeguarded the city’s constitutional order and was “confirmed” by the court.
Meanwhile, Ho added that the principle of “Patriots Governing Macau” is the foundation of the “One Country Two Systems” Principle, and that the parliament should only consist of patriots.