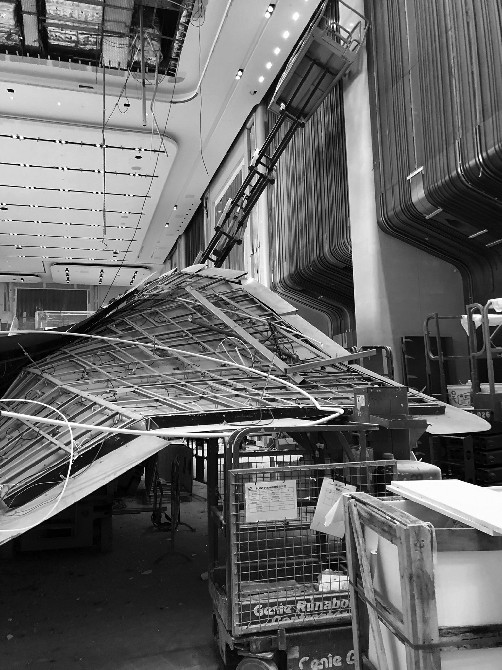 A ceiling structure has collapsed at Galaxy Macau Phase 3 construction site, injuring five workers.
The accident occurred at 11 a.m. on Saturday, October 30. A rescue team deployed by the Fire Services (CB) managed to retrieve one of five workers injured after they had been trapped under the fallen structure.
According to reports from CB, two of the workers presented significant injuries and were sent to the Conde de São Januário Hospital Center for treatment.
One of the workers sent for care was a 36-year-old mainland resident, with injuries to his back, head, and knees. A second male, a 33-year-old local resident, was sent to the hospital due to an open fracture on one of his elbows.
The three other local men were treated on-site for minor injuries, and also sent to the hospital as a precautionary measure.
The Labour Affairs Bureau (DSAL) deployed staff to investigate and follow up on the accident. According to them, the cause(s) of the collapse of 150 square meters of ceiling structure is yet to be determined.
Preliminary investigations carried out by DSAL staff have indicated that the cause(s) of the accident may be related to either a design fault or the quality of the structure’s workmanship.
DSAL added that they have ordered the contractor to suspend all work in the accident area to ensure the safety of workers and allow continued investigation.
The Bureau has also said that it will follow up closely on the injured workers, and ensure that they get the necessary medical treatment, as well as compensation for the work accident suffered.
The Galaxy Macau Phase 3 construction site has been affected by several construction accidents, which have resulted in the death of four workers.
The most serious accident occurred in March 2020, claiming the lives of three workers. It was then the DSAL called the construction site unsafe.
In mid-August 2021, another worker from the same site lost his life after falling from a height of five floors. According to the Judiciary Police report, the man fell after being electrocuted while working on electrical wiring.