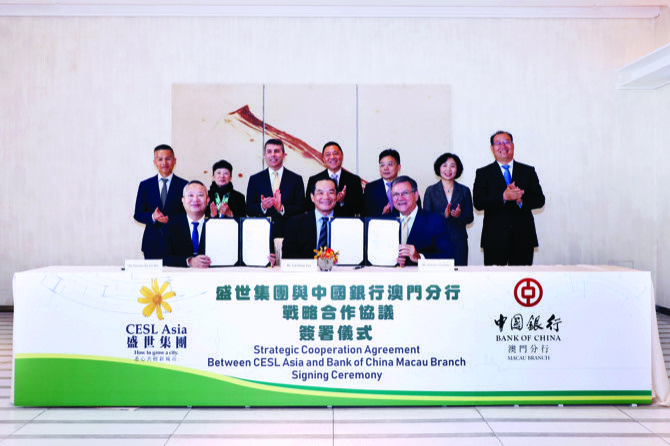 Local energy and environment firm CESL Asia has signed a strategic cooperation agreement with the Bank of China Macau Branch to intermediate investments between China and Lusophone countries, seeking to underpin Macau’s role as a platform for trade and cooperation with Portuguese-speaking countries, as designated by Beijing.

The agreement, signed at a ceremony on Friday, is the first such agreement with a local bank designed to develop a financial investment platform between China and the Lusophone world.

“We are building a financial platform in Macau to support our project development platform, while expanding our cooperation with financial institutions in China, Portugal and Macau,” said CESL Asia President Antonio Trindade on the occasion.

Using its bases in Macau and Portugal, the firm will facilitate deals for Chinese investors looking to do business in Portuguese-speaking countries, helping them to acquire assets and business and “produce economic and social value.”

The signing ceremony was attended by several high-ranking officials in Macau. Among them was the Secretary for Economy and Finance, Lionel Leong, the director general of the economic affairs department of the Liaison Office of the Chinese central government, Liu Bin, the head of Forum Macau, Xu Yingzhen, and the Portuguese Consul General in Macau and Hong Kong, Paulo Cunha Alves.

CESL Asia also finalized an agreement Friday to buy the largest Portuguese cattle-breeding firm, Monte do Pasto, for an investment of about 40 million euros (MOP367 million).

Monte do Pasto, which oversees nine farms in the Alentejo region spanning almost 3,700 hectares, exports around 30,000 live cattle per year, mainly to North Africa and the Levant, but also to neighboring Spain. For comparison, Macau is approximately 3,000 hectares in size.

The cattle exporter, already an established business in the Mediterranean, is an ideal candidate for CESL management, said Trindade. The local firm wants to support Monte do Pasto and bring its operations in line with the Greater Bay Area agenda and the development of ties with Portuguese-speaking countries.

Trindade also said that the investment is not just about cattle exports, but that the land can be used for environmental- and energy-related projects. “This is value creation,” he told local media referring to the investment, adding that “we can use [the land] for solar power production, for energy production or to grow food.”

The deal is expected to complete in the coming months, with Portugal’s Novo Banco as a partner, and the financial support of BNU.  Additional reporting by Julie Zhu