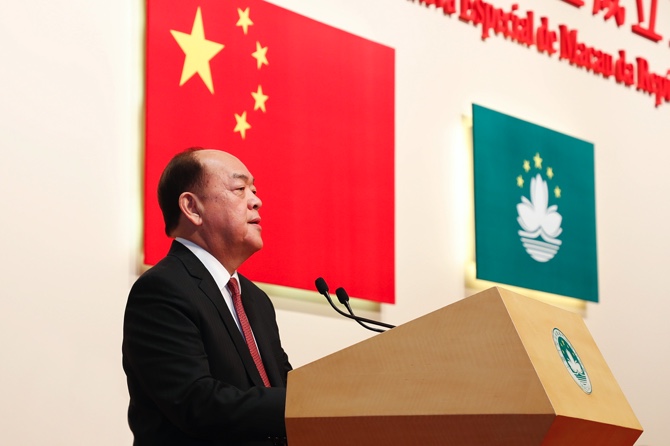 The people of Macau will embark on a journey in 2020 that will take them deeper into the country’s development plan.

That was the message relayed by Chief Executive Ho Iat Seng, who used his first New Year message to once again stress the need for Macau to take advantage of the opportunities arising from the development of the country. He said that this year, Macau would pursue closer alignment with the mainland by adopting the “supportive measures” granted by Beijing.

Macau’s new Chief Executive did not indicate any new policies or change of direction in his New Year message, nor was he speaking specifically about 2020.

Indeed, few of the directives outlined in Ho’s speech concerned the new year. Most served to recall long-running policies of the SAR government that are still being pursued with varying degrees of success: to diversify the economy away from its reliance on casinos; to improve people’s livelihoods and quality of life; to create opportunities for young people; to make use of supportive measures adopted by the Central Government; to safeguard national sovereignty in the SAR; and to oversee the “successful implementation” of the ‘one country, two systems’ principle.

In the year ahead, the Chief Executive said that the government would need to show great foresight, be well-prepared for adverse situations, be innovative and pragmatic, and promote projects that build upon the several roles bestowed upon Macau by Beijing.

Also in the year ahead, the government will focus on issues that are “of most concern to the public.” This includes public administration reform, economic diversification and the improvement of people’s livelihoods, but will also entail the creation of favorable conditions for young people to develop a “national awareness in order for them to pass on to the next generation the core values of loyalty to the country and to Macau.”

In addition, the government will endeavor to make use of Macau’s advantages as a multicultural society – “with an emphasis on Chinese culture” – and facilitate international exchange based on its role as the nexus of China-Lusophone trade relations.

The Chief Executive said that in order to drive prosperity and economic diversification, Macau will need to actively integrate itself into the overall national development plan, including the assumption of a larger role in the advancement of the Greater Bay Area project.

According to a statement from the government, Ho reminded the public that the coming years would bring not only “tremendous opportunities for Macau’s advancement,” but also “all kinds of challenges to face.” To overcome these challenges, all sectors of society will need to band together and use their “collective wisdom and power” to enable the SAR to reach new milestones.

Meanwhile, 2019 was a significant year for Macau, said the Chief Executive. It was a year of sustainable economic development, gradual improvements in people’s livelihoods, as well as social stability and multicultural inclusiveness, said Ho.

The year was also notable because of the dual anniversaries of the 70th year since the founding of the People’s Republic of China and the 20th year since the establishment of the Macau Special Administrative Region.

Chinese President Xi Jinping, who made his first visit to the city in five years last month, unveiled “Four Aspirations,” “Four Persistences” and “Four Expectations,” which are currently being studied by the local government. These will serve as clear direction and guidance for the future development of the Macau SAR, said Ho.