China calls for US, European companies to join Belt and Road 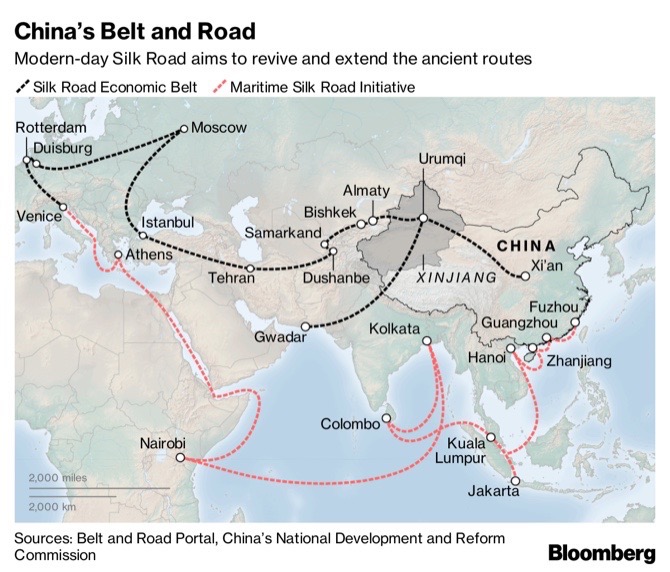 China pledged greater cooperation with American and European companies on Belt and Road ventures, in its latest bid to counter criticism that President Xi Jinping’s initiative is focused on projecting Beijing’s influence at the expense of host countries.

China wants to combine its manufacturing and construction know-how with the advanced technology of Western firms on the global trade-and-infrastructure program, said Zhou Xiaofei, deputy secretary general of the National Development and Reform Commission. Projects could also benefit from partnerships with U.S. and European enterprises on professional services, management and financing, Zhou said yesterday.

“The Belt and Road Initiative is not a private path of one party, but an avenue of sunshine for everyone to go forward hand in hand,” Zhou told a seminar in Zhengzhou, Henan, promoting international cooperation on the program. “China is not singing solo, but in a chorus of countries along the Belt and Road.”

The two-day event is part of a broader Chinese effort to soften the image of Xi’s main foreign policy program as host countries grow more cautious and the U.S. criticizes its loan-based funding model as “debt-trap diplomacy.” Accusations of corruption, influence-peddling and unfair contracts have dogged the initiative, and a potential agreement with Italy – the first with a Group of Seven nation – drew Deputy Premier Matteo Salvini’s warning that it risked “colonizing Italy.”

The Zhengzhou conference – hosted by the Chinese government – showcased several BRI projects, including a hydro-power station in Pakistan and the Mombasa-Nairobi Railway, about a month before Xi is expected to host the second Belt and Road forum in Beijing. Chinese Foreign Minister Wang Yi said last week that this year’s forum would include attendees from more than 100 countries.

GE has cooperated with Chinese partners on 37 gigawatts of power generation projects since 2013, said Hu Jingmiao, commercial general manager of GE Power’s China EPC Steam Power Systems. Hu said the company has provided equipment for projects in places such as Brazil, Kenya and Pakistan, as well as Saudi Arabia.

Chinese authorities have noted examples of misconduct and are reassessing and tweaking their global infrastructure plans, a senior official who asked not to be named told Bloomberg News in December. Authorities have stepped up scrutiny of BRI projects and investment and are deliberating possible regulations, the official said, adding that China is ready to take measures to clamp down on misconduct.

The public was still uncertain about what a Belt and Road project is even though it’s been a catchphrase for the past five years, said Liu Weidong, a researcher at the Chinese Academy of Sciences who has focused on initiative. The selection of projects at Thursday’s seminar showed what is valued “from the government’s perspective,” he said. Bloomberg