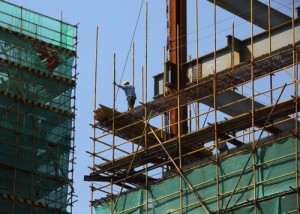 A worker labors on a residential building under construction in Shanghai

A Chinese services-industry index declined to a six-month low in July, dragged down by a weaker property market.
The non-manufacturing Purchasing Managers’ Index fell to 54.2 from 55.0 in June, the Beijing-based National Bureau of Statistics and China Federation of Logistics and Purchasing said yesterday in Beijing. A reading over 50 indicates expansion.
Yesterday’s report highlights the danger a correction in the property market poses to growth in the world’s second-biggest economy and contrasts with a government report last week that showed manufacturing expanded at the fastest pace in more than two years. The International Monetary Fund’s China mission chief warned last week that real estate is the biggest near-term risk to the economy.
“Real estate continued to soften, reflecting a thin market in the low season, while the range of price discounting widened,” Cai Jin, a vice chairman at the logistics federation, said in the statement. “The decline in the index isn’t large and overall, markets are stable.”
A gauge of business expectations in the survey rose to 61.5 in July from 60.4 in June, yesterday’s report showed.
Services accounted for 46.6 percent of gross domestic product in the first half of 2014, 1.3 percentage points higher than the same period a year earlier, the National Bureau of Statistics said last month when it released second-quarter GDP data.
Expansion in services quickened to 8 percent in the first half from 7.8 percent in the first quarter, and compared with a 7.4 percent pace in manufacturing, mining and construction industries, the agency’s data show.
The non-manufacturing index from the statistics bureau and CFLP is based on responses from purchasing managers at 1,200 companies in 27 industry groups including catering, retailing, construction and transportation. A new seasonally adjusted series began in March 2012 and the data were revised back to March 2011.
A separate survey of purchasing managers in services industries will be released by HSBC Holdings Plc and Markit Economics on Aug. 5. Its June reading of 53.1 was the highest in more than a year. Bloomberg