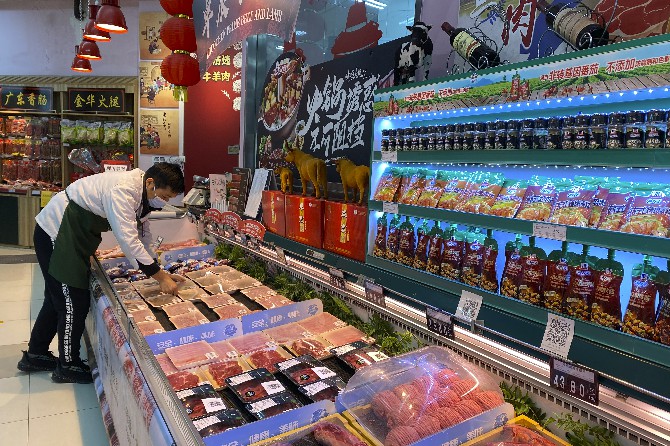 China is stepping up virus inspections on imported food packaging as cooler weather brings new waves of coronavirus infections in several overseas countries, Chinese officials said yesterday.
Packaging is “not exempt” from carrying the virus, deputy director of the National Food Safety Risk Assessment Center Li Ning told reporters.
While the coronavirus positivity rate for tests on packages was just 0.48 per 10,000, that proportion is increasing along with the number of tests being conducted, Li said.
She said the virus could “to some extent” be passed to humans from packaging, although neither Li or any other official at yesterday’s news conference mentioned any such confirmed cases.
Chinese testing of packaging has stirred some controversy, with exporters of frozen food items questioning the science behind it and whether it amounts to an unfair trade barrier. China has defended the practice as an additional measure to prevent the virus’s spread.
Through mask mandates, mass testing, lockdowns and case tracing, China has largely eliminated cases of local transmission, causing it to place extra attention on infection threats from outside the country. China’s National Health Administration yesterday reported five new cases, all imported, bringing China’s total to 86,469, including 4,634 deaths.
Stopping the virus’s spread is “like fighting a war,” demanding fast, decisive action, CDC Chief Epidemiologist Wu Zunyou said.
“Victory only comes after the entire country is united in its efforts. On this front, technical strategy, strong leadership and coordinated action all play important roles,” Wu said.
The coronavirus is known to be more stable in colder, dryer conditions, and disinfecting packaging at freezing temperatures creates “special challenges,” said Zhang Liubo, chief disinfection officer for the Center for Disease Control.
Even when disinfection works and the virus is no longer infectious, remnants can remain on the packaging, leading to a positive test, Zhang said.
However, “as of present, we have yet to discover any infection caused by direct consumption of products from this cold chain,” Zhang said. AP