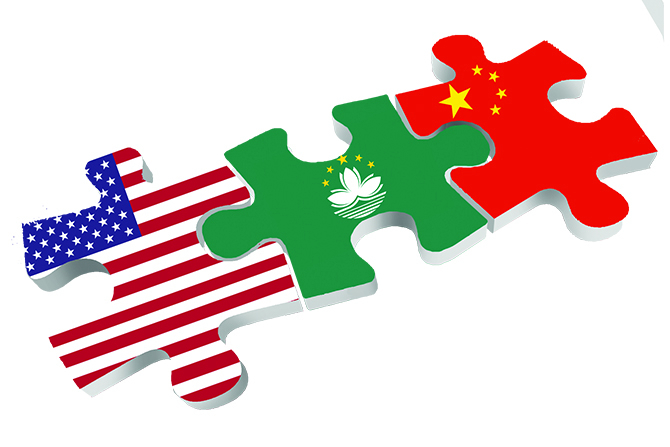 Macau is thought to be able to weather the ongoing China- U.S. trade dispute because of its strategic business connections to the world’s two largest economies. This opinion was voiced by Alexander Kocsis, a lawyer and businessman with corporate experience in China and internationally.

“I think for Macau, like the rest of the world, it is very hard to avoid it [the influence of the China-U.S. trade dispute]. It is a question of chasing, how to position and place yourself in order to either capture opportunity or avoid trouble,” Kocsis posited, on the sidelines of his China-U.S. trade dispute talk yesterday at the France Macau Chamber of Commerce.

In the lawyer’s opinion, Macau’s advantage in the China- U.S. trade dispute is that it can be flexible with both parties. “So, there could be opportunities in terms of trade that way,” Kocsis told the Times.

The law professor believes that in the near-term there will be some form of trade agreement between the U.S. and China, or the dispute will eventually go away.

“But in the long term, if Macau demonstrates agility, it can look for the structural causes of the trade dispute and try to take advantage of these structural causes to position Macau to better serve China and the United States as a bridge [between them],” said Kocsis. “They will always need a bridge.”

Moreover, the lawyer suggested that China would refrain from utilizing Macau’s gaming concessions as a bargaining chip in the trade war.

“I don’t think China will do that,” he said. “I think they have a lot to gain from the gaming situation as it currently exists. I think they will simply negotiate the concession in a fashion that is good for them.”

From the lawyer’s perspective, the China-U.S. trade dispute will eventually be resolved as both parties need an agreement.

In his opinion, the agreement will not address the underlying causes of the dispute and, as a result, China and the U.S. will continue to be rivals for years to come.

Regarding the underlying causes of the dispute and how they can be resolved, Kocsis explained that the U.S. is being hurt by intellectual property theft, the targeting of American industries, and the loss of American jobs and wealth, which is “made worse by China’s pronouncement of the Made in China 2025 Plan.”

“The Made in China Plan will deepen the state’s role in the economy. The worry is that this will magnify global market distortions,” Kocsis believes.

According to the law professor, China “cannot acquiesce to U.S. demands without giving-up its state-led industrial mode and its pursuit of sustainable growth based on high-tech exports.”

Contrary to Alexander Kocsis’ opinion at yesterday’s talk, the Monetary Authority of Macao (AMCM) says it is taking the risk of spillover effects from the China-U.S. trade war very seriously.

In the latest edition of the Monetary and Financial Stability Review, the AMCM noted that Macau’s highly exposed and small economy is sensitive to external shocks.

“Taking into account that China-U.S. trade tensions might soften trade growth and worldwide growth momentum, global financial conditions are expected to tighten alongside monetary policy normalization,” states the report by the AMCM.

Accordingly, “vigilance is required towards a number of key risk factors in the near and medium term.” DB