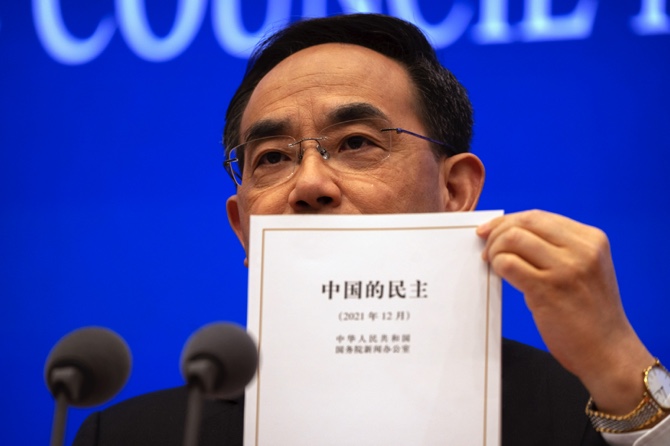 Xu Lin, vice minister of the Publicity Department of the Central Committee of China’s Communist Party holds a copy of a government-produced report titled “Democracy that Works” in a press conference Saturday in Beijing

China’s Communist Party took American democracy to task, sharply criticizing a global democracy summit being hosted by President Joe Biden next week and extolling the virtues of its governing system.

Party officials questioned how a polarized country that botched its response to COVID-19 could lecture others, and said that efforts to force others to copy the Western democratic model are “doomed to fail.”

The harsh rhetoric reflects a growing clash of values that has been thrust into the spotlight as China rises as a global power. The question is whether the United States and other leading democracies can peacefully co-exist with a powerful authoritarian state whose actions are at odds with the Western model that emerged victorious at the end of the Cold War.

The pandemic exposed defects in the American system, said Tian Peiyan, the deputy director of the Communist Party’s Policy Research Office. He blamed the high COVID-19 death toll in the U.S. on political disputes and a divided government from the highest to the lowest levels.

“Such democracy brings not happiness but disaster to voters,” he said at a news conference to release a government report on what the Communist Party calls its form of democracy, which is firmly under party control.

Neither China nor Russia are among about 110 governments that have been invited to Biden’s two-day virtual “Summit for Democracy,” which starts Thursday and will address strengthening democracy, defending against authoritarianism, corruption and human rights.

The participation of Taiwan, a self-governing democracy that China says should be under its rule, has further angered Beijing.

U.S.-China relations remain strained despite a virtual summit between Biden and Chinese leader Xi Jinping last month. The American president has repeatedly framed differences with China in his broader call for the U.S. and its allies to demonstrate that democracies can offer humanity a better path toward progress than autocracies.

The Communist Party has ruled China single-handedly since 1949. It says that various views are reflected through consultative bodies and elected village and residents committees, but silences most public criticism with censorship and sometimes arrest.

The party argues that strong central leadership is needed to maintain stability in a sprawling country that has been riven by division and war over the centuries.

“In such a large country with 56 ethnic groups and more than 1.4 billion people, if there is no party leadership, … and we uphold the so-called democracy of the West, it will be easy to mess things up and democracy will work the opposite way,” Tian said.

China has been accused of mass incarceration, torture and other human rights violations as it enforces control over ethnic communities in its remote western regions of Tibet and Xinjiang. The party rejects the accusations and says it is rooting out extremism and separatist movements.

The recent difficulties faced by some Western democracies have given Communist Party leaders more confidence in their system as they try to build China into a global power. State media often cite the chaos of the insurrection at the U.S. Capitol after the last presidential election. The report issued Saturday said “today’s world is facing challenges of excessive democracy.”

Chinese officials frequently accuse the U.S. and others of using democracy as a cover to try to suppress China’s rise, a charge echoed at the news conference by Xu Lin, the vice minister of the party’s publicity department.

“The U.S. calls itself a ‘leader of democracy’ and organizes and manipulates the so-called Summit for Democracy,” he said. “In fact, it cracks down and hampers countries with different social systems and development models in the name of democracy.”

Xu called it undemocratic for others to demand their form of democracy, saying they have a mixed track record themselves.

“Their domestic governance is messed up, but they point fingers at and criticize other democracies,” he said. “Is this the democracy they advertised?” KEN MORITSUGU, BEIJING, MDT/AP