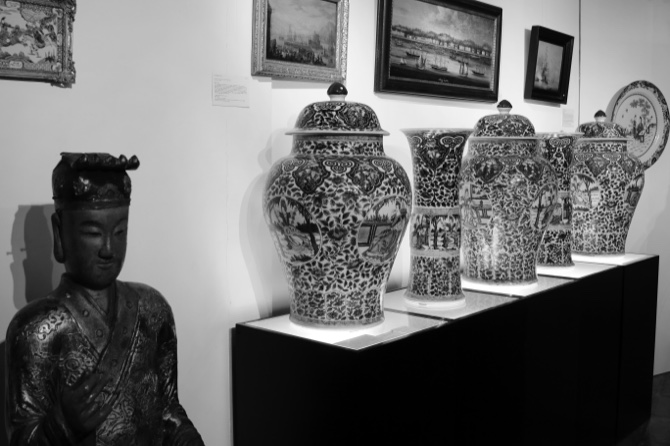 In an initiative of the Orient Foundation, an exhibition of Chinese porcelain dating back to the Qing Dynasty was launched yesterday evening at the Casa Garden venue.

The event, hosted by the Macau delegation of the Portuguese foundation, includes a high number of porcelain pieces by the antiques dealer Luís Alegria, a Porto-based dealer who brings to the region many pieces that have been on display in several parts of the world, from Europe (Brussels, London, Lisbon, Porto, Paris, Basel, Monte Carlo and Maastricht) to Brazil (São Paulo), as well as in the U.S. (New York and West Palm Beach) and Hong Kong.

Among the high number and diversity of pieces on display, and besides the porcelain ones, there are also paintings and furniture; some with connections to Macau as well as the larger, surrounding region.

As an example, there is a set of gouache paintings presented on paper dating from the 19th Century that illustrate views of Macau’s Praia Grande area, as well as of the city of Canton (now known as Guangzhou) and Singapore.

Among the objects that the art dealer considers the most rare are examples of China porcelain, painted with western motifs or representations of western life. Alegria thinks these can only have come about from special requests made by wealthy families in the West to Chinese artisans at the time. These pieces are adorned with royal motifs as well as representations of Portuguese vessels and French women.

The exhibition will be on display at the lower ground floor of Casa Garden until September 21.