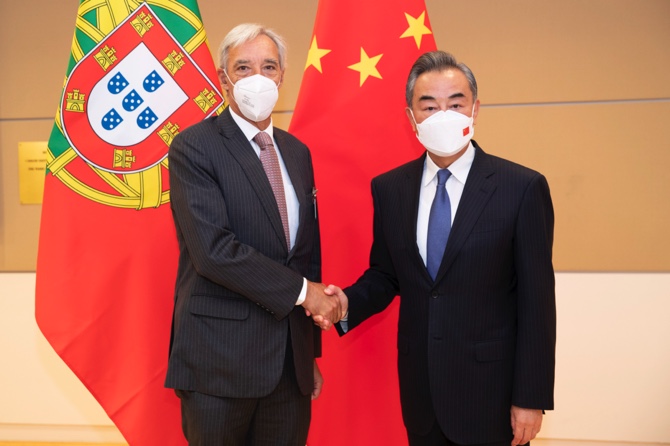 Noting that the Chinese people have friendly feelings towards the Portuguese people, Wang said the China-Portugal relationship has stood the test of the international landscape changes and achieved sound development on the basis of mutual understanding and mutual trust.

The two countries have advanced their practical cooperation while overcoming the impact of the COVID-19 pandemic, Wang said, adding that exports of Portuguese agricultural and food products to China are growing rapidly, and that cooperation between large companies from both sides and tripartite cooperation are progressing smoothly.

Both China and Portugal are committed to practicing true multilateralism, he said.

In the face of the turbulence and transformations in the international situation, China is willing to work with Portugal to jointly uphold the UN’s core role in international affairs, and promote the cause of human peace, development and progress, he said.

Wang said Portugal, as an important EU member, has been playing a positive and constructive role in China-EU exchanges.

China, he said, expects mutual understanding, mutual appreciation, peaceful coexistence and mutually learning with European countries, including Portugal, as well as respect for each other’s development path chosen on the basis of their respective historical and cultural legacy.

He also expressed the expectation that the EU side will take an objective, rational and impartial attitude, and hold on to the mainstream of China-EU cooperation, so as to yield win-win results.

For his part, Cravinho said friendly exchanges between Portugal and China have lasted for centuries, and bilateral practical cooperation in various fields has developed fast.

Portuguese companies have a strong interest in investing in China, he said.

China plays a critical role in addressing common challenges such as safeguarding peace and security, and tackling climate change, he said.

The Portuguese side appreciates China’s positive role in international affairs, and stands ready to maintain high-level exchanges and promote strategic dialogues with the Chinese side, he said.

Portugal agrees on the diversity of civilizations, calling for enhancing mutual understanding through open and candid dialogue to create favorable atmosphere for Portugal-China and EU-China cooperation, he added.

The two sides spoke highly of the smooth handover of Macau through friendly negotiations between the countries, which created a cooperation highlight, and pledged to jointly increase support for the Community of Portuguese-Speaking Countries.

Calling the practice of “one country, two systems” in Macau effective, Cravinho said he expects Macau to continue to act as a bridge to facilitate Portugal-China cooperation.