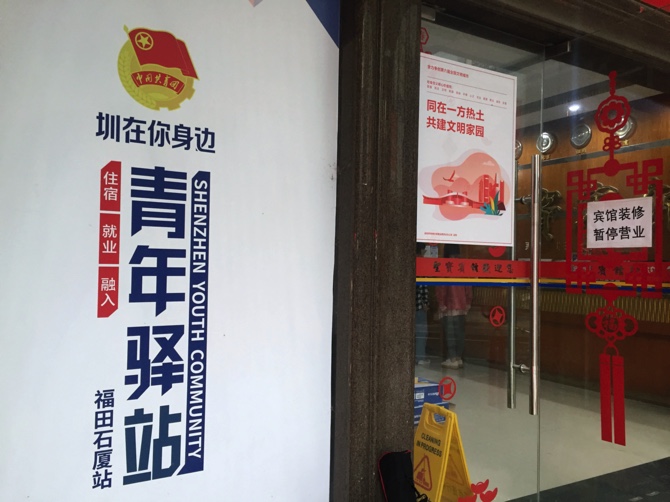 The mainland Chinese students arriving from Hong Kong huddled with their suitcases, waiting for a bus to take them to temporary accommodation in this city across the border from the protest-wracked territory.

“We’ve just escaped,” said one postgraduate student, among a dozen from the Hong Kong University of Science and Technology.

After anti-government demonstrators barricaded university campuses this week, hundreds of Chinese students retreated to the mainland city of Shenzhen, where the ruling Communist Party’s Youth League promised them a “warm home.”

The party organization said in a notice this week that mainland students could stay free-of-charge at one of 12 designated youth hostels in the southern Chinese city less than 30 kilometers from the chaos.

The postgraduate student said he feared for his safety after black-clad demonstrators beat up a classmate. Protesters have written online that they would break into mainland students’ dorms and professors’ offices to check for Chinese flags.

“The situation has gradually deteriorated,” he said. “It’s escalated from intimidation to threats. Everyone worries that he or she will be the next target.”

He and other students spoke on condition of anonymity because they feared being harassed by protesters, who have posted the private information of Hong Kong police officers and their family members online.

On the other side, social media users have publicly identified mainland Chinese who expressed sympathy for the protest movement.

Even as Chinese media such as the nationalistic Global Times newspaper described students fleeing campus “war zones,” Chinese authorities are tightly controlling the narrative and official notices about free housing don’t even mention the protests.

The Chinese University of Hong Kong has a Shenzhen campus that is giving lodging to fleeing students and CUHK alumni working in Hong Kong. A teacher said they had received orders not to discuss the program publicly.

“We’re trying to be low-key,” said the teacher, who spoke on condition of anonymity because she was not authorized to talk to the media.

“We don’t want to give the impression that we’re separate from Hong Kong,” she said. “This is just temporary. At the end of the day, we’re still all one family.”

A former British colony, Hong Kong was returned to China in 1997 under the framework of “one country, two systems,” which promises the territory certain rights and freedoms not afforded to the mainland.

The protests began in June with hundreds of thousands marching peacefully against a now-withdrawn extradition bill that would have allowed Hong Kong residents to be sent to stand trial in the mainland. That outrage at the bill was triggered in part by sentiment that Beijing is increasingly encroaching on the territory’s freedoms.

The fact that students are taking shelter from the tumult in Hong Kong presents a conundrum for the central government, both because Hong Kong is part of China and because Beijing has portrayed the protesters as a fringe group, with most of the population opposed to them.

The Communist Youth League is using an existing “Grad Home” program, which was established in 2013 for recent graduates seeking jobs in the tech hub. They are housed in small hotels and hostels across the city.

At a “Grad Home” in Shenzhen’s Futian district, boxes of water bottles were stacked in a lobby where a handful of red-vested staffers eagerly greeted visitors with the question: “Are you a mainland student from Hong Kong?”

Staffers at three hostels said they had received a directive from the Shenzhen Communist Youth League not to accept media interviews, though they said the league had arranged previous interviews with Chinese media.

A woman who answered the phone at the Communist Youth League said she was not aware of any media reports about the program and refused to give permission to interview workers at the hostels.

Youth League members intercepted AP journalists when they tried to approach mainland students outside the hostels.

“This is a sensitive time,” one said. “Please understand how the students might feel.” YANAN WANG, SHENZHEN, AP