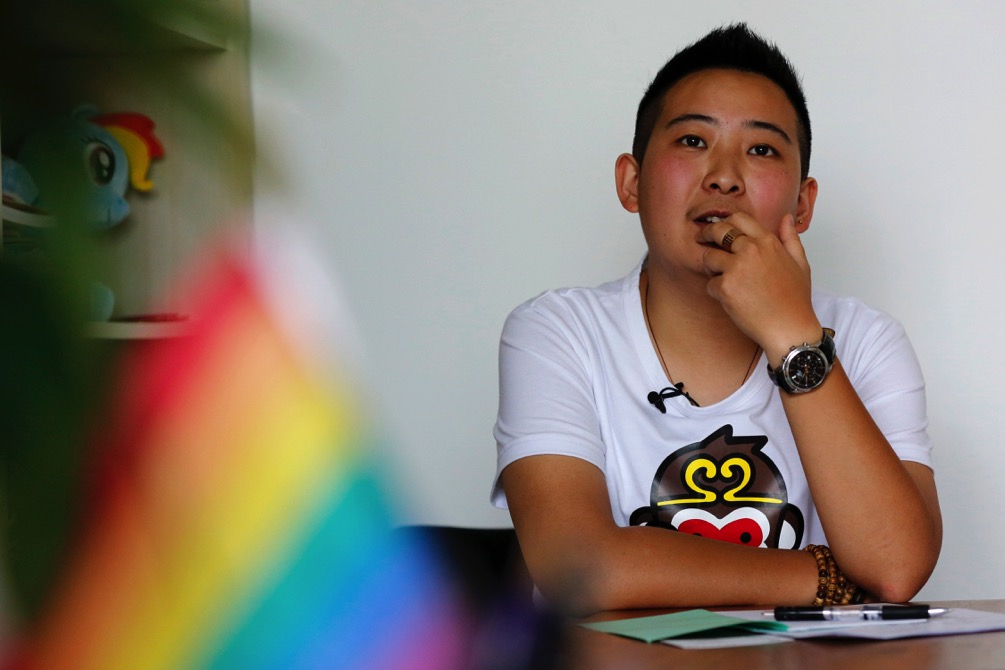 A transgender equal rights supporter who goes by the name of “Mr. C” pauses during an interview with AP in Beijing

A 28-year-old transgender man who goes by the name of “Mr. C” has become the public face of the fight for job equality in China, where sexual and gender minorities are only beginning to emerge from virtual invisibility.
The man, who keeps his real name secret to protect his parents’ privacy, is fighting his dismissal from a medical testing center in court and is seeking a ruling stating that no one should be discriminated against on the basis of gender identity or sexual orientation.
“On my shoulders I am carrying the hopes of many, many people,” said Mr. C, who’s been both praised and insulted since filing the country’s first suit against transgender job discrimination earlier this year.
“Many people are working toward [employment equality]. I cannot let them down. There are many members in our group who are unwilling to or dare not step forward, but they are watching.”
While still relatively conservative, Chinese society has grown gradually more accepting of gays, lesbians, bisexuals and transgender people in recent years, particularly among the younger generation. That’s encouraged some members of sexual and gender minorities to come forward and demand their legal rights, with mixed results.
In 2014, a Beijing court ruled “conversion therapy” intended to change gays’ sexuality to be illegal. A court in the central province of Hunan shot down an attempt by a gay couple to register their marriage in April.
Although never specifically outlawed, alternative expressions of sexuality were frowned upon following the 1949 establishment of the communist People’s Republic, which associated them with the corruption and decadence of the former imperial regime. Those caught up in police raids could be jailed on charges of hooliganism or even executed during particularly severe crackdowns.
In 2001, however, the Chinese Psychiatric Association removed homosexuality from its list of mental disorders. Police raids on LGBT gatherings largely came to a halt, as long as they remained low-profile. Empowered by the internet and social media, LGBT groups in different cities began networking, leading to calls for strong legal protections.
China has no law addressing employment discrimination, and efforts are ongoing to enact laws protecting minorities in the workplace.
Mr. C hopes to nudge the government toward recognizing and protecting LGBT rights. Born female, Mr. C grew up in the southwestern province of Guizhou, a more conservative environment than the eastern cities of Beijing, Shanghai and Guangzhou. He didn’t even come across the term “transgender” until age 21, when he finally was able to best describe his gender identity.
After graduating from college in 2010, Mr. C continued to appear as a woman when applying for jobs. That all changed in 2013, when he began dressing as a man, wearing a buzz cut and growing a mustache.
In 2015, he applied for a sales job with Ciming Health Exam Center in the provincial capital of Guiyang, but was let go at the end of the eight-day tryout. He believes he was dismissed because of his gender expression, but the company argued his job performance had been substandard.
Mr. C took the dispute to a local labor arbitration panel, which ruled in early May that his dismissal had been legal, while ordering Ciming to pay him $62 in back wages.
Days later, Mr. C filed his case in a local court, which has yet to put it on the docket.
“Now I place my hope with the law,” he said. “I will do whatever I can do to fight to the end.” MDT/AP