Confidence high that HK dollar will stay in currency peg 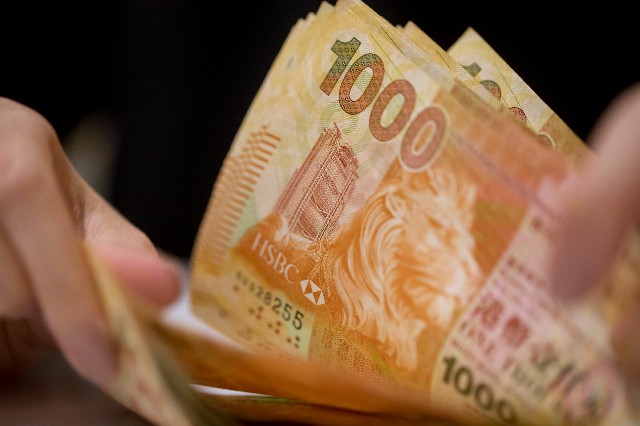 Hong Kong’s de facto central bank said that confidence in the city’s three-decade-old currency peg to the U.S. dollar – the bedrock of its status as a financial hub – remains strong, despite almost six months of pro-democracy protests.
The Hong Kong dollar is pegged to the U.S. dollar in a band that ranges between 7.75 and 7.85 to the U.S. dollar. In turn, Macau’s pataca is fixed to the Hong Kong dollar at an exchange rate of 1.03.
As the Hong Kong dollar is pegged to the greenback, both special administrative regions essentially import U.S. monetary policy. The Monetary Authority of Macao says that the policies in the two territories “should be basically consistent in order to maintain the effective operation of the linked exchange rate system.”
The Hong Kong dollar holds special status in Macau, as the currency is not only circulated alongside the pataca, but supplants it for large transactions such as property and motor vehicle purchases.
The indirect link with the U.S. dollar is of additional interest to Macau authorities, as it influences the city’s small but vulnerable economy, which is reliant on external demand.
Wedged between the world’s two largest economies, a weaker Chinese yuan this year means mainland gamblers have less to spend on Macau’s hotels, restaurants and retail sector, and less to bet at its baccarat tables.
Hong Kong monetary officials say they are confident the peg will hold.
“The peg has proven that it will survive different times and different challenging periods for Hong Kong,” said Howard Lee, deputy chief executive at the Hong Kong Monetary Authority (HKMA), in an interview with Bloomberg Television yesterday. “The benefit is clearly visible and the confidence in the linked exchange rate is very strong among Hong Kong residents and also international investors. We see no need to change it.”
Eddie Yue, the latest chief executive of the HKMA, has also said on previous occasions that defending the currency peg was his first priority.
On previous occasions, the HKMA has proven adept at defending the peg, using a reserve pile of some $440 billion. Yesterday, the Hong Kong dollar was trading at between 7.827 and 7.828 per dollar, safely within its 10-cent range.
In 1998, the Authority earned much praise for defending the peg against billionaire investor George Soros, whose aggressive currency trades sought to undermine or break it.
Authorities have intervened to defend it again since, and this year have been forced to push back against renewed attacks by investors such as Hayman Capital Management founder Kyle Bass. DB/Agencies