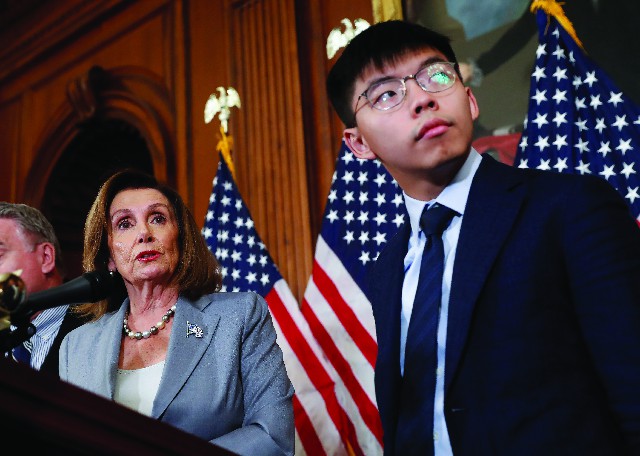 Momentum is building for quick action in Congress to pressure China to back off any crackdown on pro-democracy protesters by threatening Hong Kong’s special trading status with the U.S.
Legislation is moving through the House and Senate that would require annual assessments of whether the city is sufficiently autonomous from Beijing to justify Hong Kong’s unique treatment under U.S. law. It also would require the president to report to Congress and impose sanctions on the individuals responsible for “abducting and torturing” human rights activists.
The measure has bipartisan support in both chambers.
Americans are “united in our strong support for Hong Kong,” Republican Representative Michael McCaul said at news conference Wednesday that included Democratic House Speaker Nancy Pelosi, Democratic lawmakers and Hong Kong democracy advocates. “This is a battle between democracy and dictatorship.”
The action comes a day after a bicameral panel of lawmakers heard from pro-democracy activists visiting Washington from Hong Kong in support of the Hong Kong Human Rights and Democracy Act of 2019.
“It is my belief that it is long overdue for the United States and the free world to respond,” Marco Rubio, a Florida Republican who is sponsoring the legislation in the Senate, said during the Tuesday hearing.
However, the Trump administration hasn’t said whether it would support the legislation at the same time as it’s engaged in negotiations to de-escalate the trade war with China. Chinese trade officials are scheduled to travel to the U.S. this week to prepare for a meeting of senior negotiators in October.
“The president has made very clear that he supports the right of people in Hong Kong to be protesting out in the street for their freedom,” Trump senior adviser Kellyanne Conway told reporters. But she said she hadn’t discussed Rubio’s proposal with the president.
At a hearing Wednesday, Senator Bob Menendez, the ranking Democrat on the Foreign Relations Committee, asked the assistant secretary of state for east Asian and Pacific affairs, David Stillwell, whether the White House supports the Hong Kong measure.
“I need to take a longer look at the legislation,” Stillwell said.
“I would urge you to do so because it’s a pretty bipartisan effort here and we believe that it’s an appropriate one so I would like to get a clearer answer from the administration,” Menendez said. “We’d welcome participation but I think this is a moving vehicle.”
Hong Kong’s government expressed “deep regret” over remarks made by its citizens at the hearing, saying in a statement that “foreign legislatures should not interfere in any form” in the city’s internal affairs.
The government “absolutely respects the public’s freedoms and rights of assembly, procession and expression,” it said. “The police will continue to fully facilitate the conduct of peaceful and rational public events by members of the public.”
China’s foreign ministry also pushed back. “We urge the U.S. and other sides to stop interfering in China’s affairs and we would like to warn certain people that any attempts to disrupt Hong Kong by soliciting foreign support will not succeed,” ministry spokesman Geng Shuang told reporters in Beijing. Daniel Flatley, MDT/Bloomberg