The Fourth China (Macau) International Automobile Exposition was held at The Venetian’s Cotai Expo from November 7-9.
This year’s event was co-hosted by the Macau Convention & Exhibition Association, Nam Kwong (Group) Company Limited and China National Machinery Industry Corporation, organized by Nam Kwong (Group) International Convention and Exhibition, China National Automotive Industry International Corporation and Macau-based Prime Marketing & Promotional Services, and co-organized by China Europe Association for Economic and Technical Cooperation, Macau Motor Traders Association and Automobile General Association Macau-China.
The 62,000 sq. m exhibition brought together over 90 major automobile brands from 15 countries and regions around the world with more than 400 vehicles on display. Over 30 high-end summits and events were hosted concurrently. According to a press release, “the expo attracted 165,000 visitors and over 200 media representatives from around the world.” 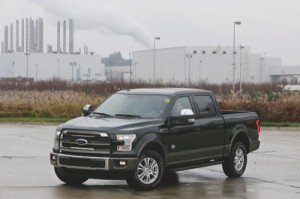 It’s Ford Motor Co.’s biggest bet in decades: an aluminum-sided F-150 that could set a new industry standard — or cost the company its pickup truck crown. Ford was scheduled to start production of the 2015 F-150 yesterday at its Dearborn Truck Plant, four miles from the company’s headquarters. It will arrive at U.S. dealerships next month.
Ford thinks a truck that is lighter and more fuel efficient, but even more capable, will win buyers while its competitors struggle to catch up. Aluminum — which is lighter than steel but just as strong — isn’t new to the auto industry, but this is the first time it will cover the entire body of such a high-volume vehicle. Ford made 647,697 F-150 pickups at its two U.S. plants last year; that’s one every 49 seconds.
CEO Mark Fields told the AP he is confident Ford made the right decision. The new truck has been through 10 million miles of testing, which is more than any other vehicle in Ford’s history, he says. “Were we recognizing that it was a risk? Sure,” Fields says. “But it was a very calculated and informed risk that gave us the confidence that we were going to get this done.”

Google is launching a campaign to help fight Ebola by contributing USD2 for every dollar people donate to a slew of nonprofits such as Save the Children and the Doctors Without Borders.
In addition, the company is also giving $10 million to support nonprofits as they work to contain the disease, which has killed nearly 5,000 people so far. Separately, Google Inc. CEO Larry Page’s Family Foundation is donating another $15 million.
Google has set aside $5 million for its matching donation, which means the public will have to donate $2.5 million to reach the maximum amount. This money will go to the donor-advised fund Network for Good, which will then distribute it to “four nonprofits doing critical work in West Africa,” Google said, adding that the company will cover processing fees so that all of the money donated will go to the groups.