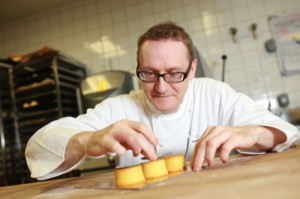 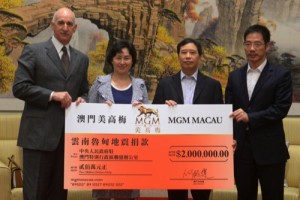 MGM Macau donated MOP2 million to the Liaison Office of the Central People’s Government in the MSAR for disaster relief after an earthquake hit the southwestern province of Yunnan on August 3.
Co-chairperson and Executive Director of MGM China Holdings Limited, Ms Pansy Ho, and Chief Executive Officer & Executive Director of MGM China Holdings Limited, Mr Grant Bowie, handed over the donation check yesterday to Mr Chen Sixi, deputy director of the Liaison Office in Macau, and to Mr Wang Xindong, director-general of the Liaison Office’s Economic Affairs Department.
MGM Macau said in a statement that it remains “committed to supporting charity and community affairs.” The company said the donation will help bring “much-needed relief to the victims of the massive earthquake,” which struck Ludian County in southwest Yunnan province.
The Liaison Office representatives expressed gratitude to MGM Macau, and vowed the quick transfer of the donation to the quake-
hit region.
The earthquake hit Yunnan province on August 3. About 12,000 homes collapsed and over 600 people have died.