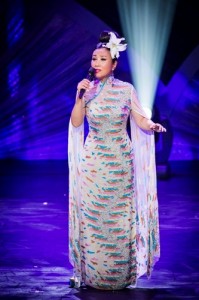 Hong Kong diva Liza Wang graced The Venetian Theatre with her first-ever Macau concert, Forever Love of Liza Wang Saturday, treating audiences to a night of fabulous entertainment before the arrival of the Mid-Autumn Festival.
The entertainment queen kick started the concert by singing one of her famous songs “Beautiful Entertainment World,” to welcome her Macau audience. The diva then continued to energize fans with a list of her hit tunes, including “Hot Coffee,” “Love and Passion,” and “The Brave Chinese,” who in turn sang along with her. Guest singers Law Kar Ying and Edmond Leung also joined Wang to perform on stage during the show. Many of her good friends including Susanna Kwan, Susan Tse, Sum Sum, Ben Ben, Annie Liew, Samantha Chuk, Eric Chung, Lily Ng attended to support Wang. 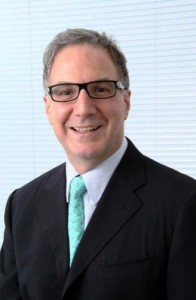 InterContinental Hotels Group (IHG) has appointed Dominique Berhouet as general manager of Crowne Plaza Macau, an IHG property to be finished in the fourth quarter this year. He will be in charge of overseeing the pre-opening phase of the hotel through its official launch to create an ideal destination for business and leisure travelers. Dominique joined IHG in 1999, and has opened or rebranded various hotels, primarily with Crowne Plaza Hotels and Resorts during his 15 years with the group.
Prior to the appointment, Dominique was general manager of Crowne Plaza Hong Kong Kowloon East and Holiday Inn Express Hong Kong Kowloon East. He has been in the industry for more than 30 years with experience across the United States, Europe, Hong Kong and China. 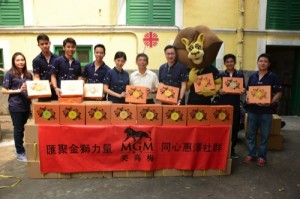 With the coming of Mid-Autumn Festival, MGM Macau specially delivered mooncakes to Caritas Macau yesterday morning. Ms. Irene Wong, MGM’s  Vice President of Sales, Public & Community Relations, and Mr. Nichols Cheung, Director of Human Resources Partner & Employee Services, together with MGM’s Volunteer Team members, presented a total of 1,700 boxes of mooncakes in double-yolk white lotus paste and egg custard flavors to the charity organization. The mooncakes were received by Mr. Pun Chi Meng, Secretary General of Caritas Macau, who will then distribute them to its nearly 30 subsidiary social services organizations. The beneficiaries include the elderly, youths, members with mental and physical disabilities, low-income households and those in need.
Mr. Nichols Cheung said, “MGM Macau holds various types of volunteer activities and community events each year. Recently, our Volunteer Team has rolled out a series of voluntary programs which were well received by the community. Here, we would like to express our gratitude to all supporting associations and hope to extend our Golden Lion spirit to the public.”